To celebrate the 10th anniversary of the Walt Disney Concert Hall 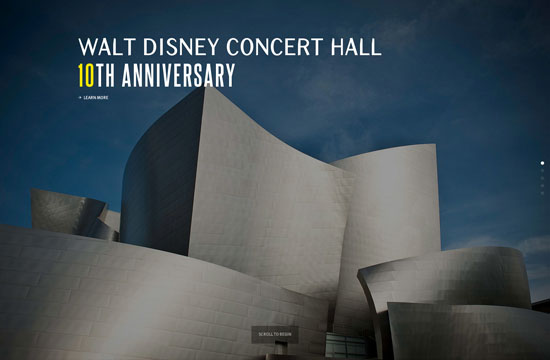 To celebrate the 10th anniversary of the Walt Disney Concert Hall, the Los Angeles Philharmonic is inviting the public to participate in an online experience featuring the architectural masterpiece and acoustic marvel, designed by architect Frank Gehry, which has changed the musical landscape of Los Angeles for the past decade.

Partnering with Hello Design, an LA-based digital creative agency, the Los Angeles Philharmonic has launched a digital destination highlighting the upcoming season and featuring the history of Walt Disney Concert Hall as a special landmark, and the aspirational performance stage for many artists from around the world. To give visitors an insider perspective, the new website features an interactive 360-degree panoramic video of a performance in Walt Disney Concert Hall, allowing visitors the rare immersive experience of being inside the orchestra and the opportunity to see the hall from many perspectives.

Additionally, the Los Angeles Philharmonic worked with Hello Design to create an easy-to-use concert selector tool called “Concert Master” as a fun starting point in a visitor’s journey to the hall. “Concert Master” takes visitors through a series of questions about their interests and makes tailored recommendations for which of this season’s concerts they might enjoy.

This new work from the Los Angeles Philharmonic and Hello Design follows the 2009 launch of an integrated campaign comprised of an iPhone app, online game and website to promote the arrival of music director Gustavo Dudamel. The app turns iPhones into a conductor's baton and the game allows users to conduct an orchestra with a Guitar Hero-inspired interface.