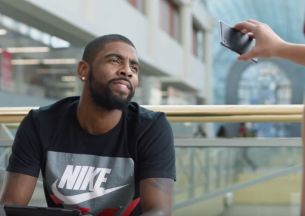 The kids’ spot, “Video Game,” opens with a boy playing NBA 2K on his mobile phone when he looks up to find that Irving is not only on his phone, but also right next to him at the mall. He approaches Irving and shows him how great he is doing playing as him in the game. After complimenting the boy on his Nike gear from Kids Foot Locker, Irving tells him his performance as the boy in a different video game isn’t quite up to par.