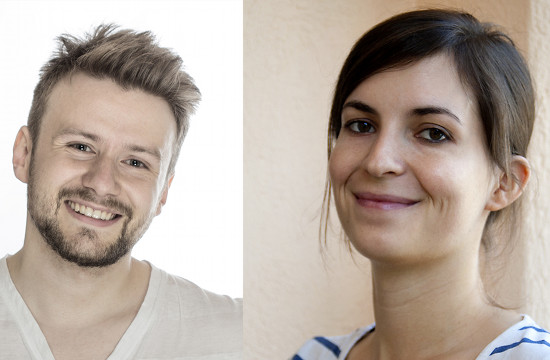 Kyra & Constantin’s ‘Rollin’ Wild’ series was one of the best received films at the New Directors’ Showcase in Cannes. And rightly so. Extensive research into the animals they choose to balloon makes for uncannily true tendencies that quickly result in brilliantly absurd outcomes. Addison Capper chatted with the duo (full names Kyra Buschor and Constantin Paeplow) about what inspired the bloated beasts.

LBB> When did you guys meet and why do you enjoy working together?

K&C> We met at the Filmakademie Baden-Württemberg in Ludwigsburg, Germany, during our animation film studies. The first four clips formed our third year project at the school and were created with Anna Habermehl as a third director. After that we decided to work together on further clips and form a company [Flying Stone] while Anna decided to specialise in character animation. We actually both like working together - we share the same sense of humour which is quite important!

K&C> Most of the inspiration for Rollin’ Wild came from diverse nature documentaries like ‘Earth’ or ‘Serengeti Shall Not Die’. We watched those films and imagined how the typical wildlife scenes would precede if the animals were not as elegant and agile as they are in real life, and instead were bloated and clumsy.

LBB> What kind of research do you do around the movement of the animals?

K&C> We watched hundreds of wildlife documentaries, specifically slow motion references for the animals we had chosen for the shorts. Luckily the BBC has a great stock footage library where you can watch hundreds of animals in their natural habitat.

LBB> Rollin' Wild was one of the most well received films of the New Directors' Showcase - why do you think it proved such a hit?

K&C> We think it’s a fresh concept that stays honest to the animals we blow up. Even though they’re out of shape, they try to act as if they’re still the same animals, which is the base of our humour. Since it stays so true to its roots, it’s appealing even to people who normally like to watch documentaries.

LBB> Can we look forward to more from the series?

K&C> We definitely want to make more bloated animals as it's always fun creating new ones. At the moment we don’t know if it’s going to be clips in the same way as the existing ones or something different. We're also open to explore other formats and new approaches.

LBB> What does it mean to be featured on the Saatchi & Saatchi New Directors' Showcase this year?

K&C> It’s an amazing honour! We are overwhelmed by the positive responses we get for our shorts and we still can’t believe it.

LBB> What does the next year hold for you guys?

K&C> In April this year we moved to London to work as directors and animators at Passion. Currently we are working on commercials and plan to go on with Rollin’ Wild soon.