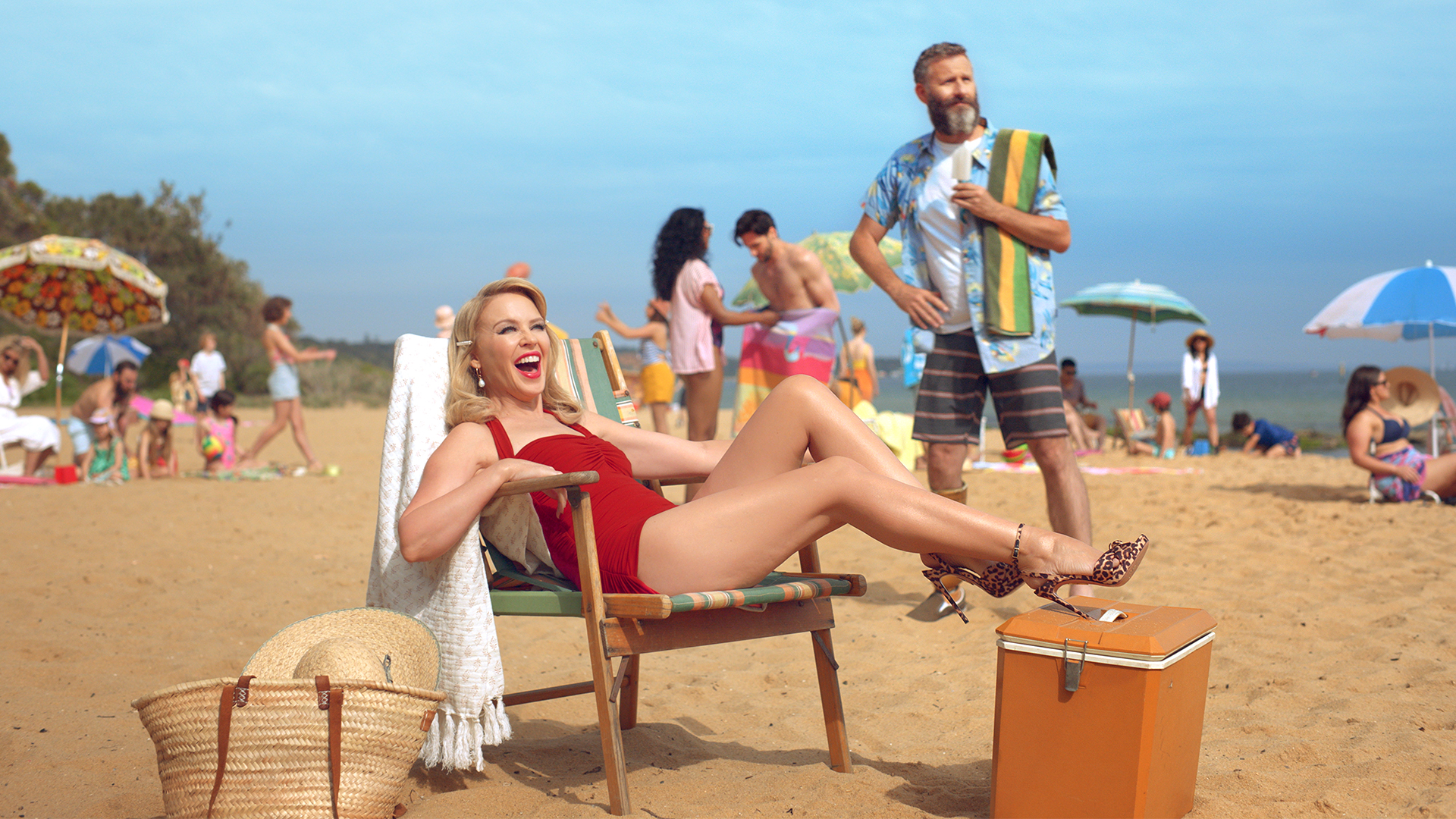 On Christmas Day, as millions of Brits tuned in to the Queen’s Speech, pop icon Kylie Minogue delivered a song of mateship to entice visitors Down Under in a new campaign via M&C Saatchi, Sydney. Matesong is the first activation of Tourism Australia’s recently launched Philausophy platform.

In a timely gesture, the 3-minute extravaganza, entitled Matesong, celebrates the rich and longstanding ties that exist between Australia and the UK.

UK audiences have been introduced to the performance in the weeks leading up to the Queen’s annual address via unbranded TV programming in partnership with ITV through on-station idents. Additionally, out-of-home advertising and an appointment to view in TV guide scheduling planted the seed. On Christmas Day in the UK, Kylie Minogue revealed the true motive behind Matesong – one nation reaching out to another in friendship when it’s needed most.

Set against a backdrop of extraordinary Australian landscapes, Matesong is the first activation of Tourism Australia’s recently launched Philausophy platform which aims to elevate the strengths of the destination to include its people, personality and way of life.

Says Susan Coghill, chief marketing officer, Tourism Australia: “We’ve sought to capture the Australian way of life with a campaign delivered in a big media moment and in a creative way we think will resonate in the UK and entice more of our British mates to visit us Down Under.”

Says Cam Blackley, chief creative officer, M&C Saatchi: “The world’s in a tricky place right now. So, it’s a pleasure to deliver a little lightness and brightness through an Aussie icon extending the hand of mateship on behalf of all Australians. And a couple of Quokkas. This is really special because it’s the first time ever one country has created a bespoke piece to directly talk to another country on a personal level.”
Says Russell Hopson, group managing director, M&C Saatchi: “Excited doesn’t come close to describing how we all feel about this work finally getting out of the bag. It’s no secret that the Brits have had a tough year, or maybe more than one, and so landing the fact that they’ll always have a mate in the Aussies was too good an opportunity to miss. And who better to deliver the message than actual pop royalty herself, Kylie Minogue? This work literally has it all, from the Queen’s speech to Shane Warne- all underpinned by a powerful strategy of selling the Australian character and way of life. We think the Brits will love it.”

Says Phillipa Harrison, managing director, Tourism Australia: “Who better to deliver the message than Kylie Minogue. She embodies so much of what we want to share with the world – our warm, fun and friendly personality. Not only does she have a deep and authentic connection with Australia, but she is a much-loved and recognised icon in the UK as well.”

Adds Coghill: “Our research supports what we in Australia all instinctively know – that the Australian way of life is unique on the world stage and incredibly appealing to people visiting our great country.”

Australia’s federal tourism minister Simon Birmingham said he hoped the new campaign would help reinvigorate the UK market: “This campaign is about reminding Brits that Australia is a diverse and welcoming destination that still offers all the things that they love about our country, from our white sandy beaches to our native animals and our famous laidback outdoor lifestyle.”

Says Neil Peace, client director, UM-UK: “A tourism board teaming up with Kylie Minogue to launch a song teasing brits to visit Australia is as unlikely as it is brave. But Matesong is a triumphant, playful nod to the things that unite us with our mates down under, from cricket to Kylie herself.

“UM London is proud to be part of such a bold, innovative campaign that reflects the hard work, innovation and conviction of both TA and it’s wider agency partners. And we’re very much in agreement, that a quokka, is really what we all need.”

Says Jack Graham, senior strategy director, UM Australia: “What makes Australia unique isn’t just the things you see, but the people you meet and their unique way of life. Nothing is more Australian than inviting someone over when they’re doing it tough. We couldn’t be more thrilled to deliver an invitation of this scale or at this time of year through our media partners. A delivery ecosystem leveraged to reignite urgency and desire to experience our way of life.”

Says Simon Brock, creative director, Digitas: “This campaign has something for every British traveller. For those entering the new year with distant hopes of travel, it’s a bright, buoyant invitation to get inspired. For those already planning their next trip, the work does a brilliant job of showing why Australia has to be on their shortlist. And if they already have their sights squarely set on Australia, it’s an all-singing, all-dancing itinerary for the trip of a lifetime. At every stage of the travel journey, Kylie’s invitation to the Brits can cut through.”

Says Jo Carr, co-founder and chief client officer, Hope&Glory: “We’re beyond excited to work with Tourism Australia on this campaign especially given their track record in delivering stand-out creative work. Australia is well known for “mateship” and who better to extend a hand of friendship to us at this time of year than cultural icon and pop royalty, Kylie Minogue.”

Says Richard Brett, CEO, opr: “We love how Matesong captures the banter of Aussie mateship and is brought to life through tongue-in-cheek lyrics, iconic Australians and incredible locations around the country. The campaign highlights the quintessential Aussie experience that’s sure to entice our British mates to visit us Down Under.”

Following the initial airing, the campaign will continue to run on British television, digital platforms, social channels, in cinemas and out-of-home advertising, and will be extended by a range of commercial and media partners including Singapore Airlines, The Telegraph UK and TripAdvisor.