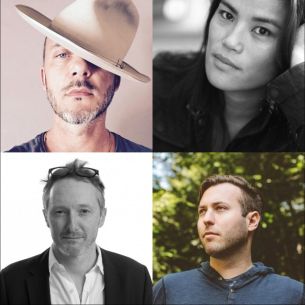 KYLE nyc, the award-winning production and post company, has announced the expansion of its talent roster with the addition of directors Eden Tyler, Peter Moore Smith, Diane Paragas and Andrew Nisinson. The quartet brings a vast wealth of experience, vision and achievement to the company. Collectively they represent everything from a senior agency creative turned director to a female filmmaker and documentarian. To view their work, please go to http://www.kylenyc.com/creators/directors.

“We pride ourselves in bringing the very best talent and resources to every client project, and these exceptional directors deepen, fortify and broaden our portfolio,” said Sarah Farrand, Executive Producer of KYLE nyc (www.kylenyc.com). “We’re thrilled to have them join our studio.”

Tyler is a director based in Los Angeles and New York. He frequently works in Europe and Southeast Asia.  His body of work includes national and international campaigns for brands including Nike, Coke, Doritos and Clean & Clear, as well as cutting-edge independent work. Tyler’s show reel spans many product categories and aesthetic styles, but it was his years of work with beauty brands that made him a natural fit for KYLE nyc, which has a long history of working on beauty and personal care campaigns.

Like Smith’s award-winning work as an ad agency ECD, his work as a director is also known for poetic storytelling that tugs at your heartstrings. It was while working as an agency creative that he discovered his favorite place was on set. Since launching his directing career, Smith has directed spots for Cheerios, Yoplait, Spectrum and Ruby Tuesday, as well as the Cannes-Lion winning PSA titled “The Talk.” Because of his long history in the advertising world, Smith loves collaborating with agencies and clients to create digital films and commercials that not only move audiences but achieve practical objectives.

Paragas moved to Lubbock, Texas after escaping martial law in the Philippines. As a way of expressing her unique cultural background, she explored music, film and art. Her work spans commercials, documentaries, narrative films and branded content. The roots of most are in the stories of real people. She’s directed campaigns for Time Warner, Playtex, Covergirl, American Airlines, Hertz and Proust.com, the latter a first place-winner in Google’s TV for All Contest. Her feature-length background includes “Brooklyn Boheme,” a documentary for Showtime, and two other projects currently in pre-production. One, an innovative documentary called “The Three Lives of David Wong,” and the other a feature length narrative called “Yellow Rose.”

Nisinson is a director from New York City. He’s directed projects for brands like Beats and AT&T, in addition to his innovative work teaming musicians and brands, such as Timberland and J. Cole. Nisinson seeks to create stunning visuals and tell meaningful stories through honest collaboration and an excitement that can best be described as a cross between your fun uncle and your English teacher.

“I think in Eden, Peter, Diane and Andrew we’ve found some exceptional storytellers who fit very naturally into the vibe and personality of our expanding KYLE family,” said Mintus. “I’m excited about the contributions they’re going to make to our work, our culture and our clients.”