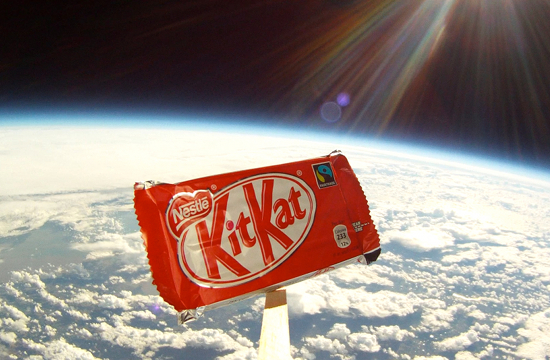 On Saturday 13th October 2012, to give Felix Baumgartner and his team a fun break, a Kit Kat was sent into space in an unparalleled show of support.
Created by JWT London, the activity ran ahead of Felix Baumgartner’s record-breaking skydive on 14th October from the edge of space.
Felix had been delayed on several occasions during the week due to the weather. As Felix and his team waited for the perfect conditions to carry out the skydive, Kit Kat sent up four fingers to the edge of space in a show of support and to keep spirits high.
The iconic four finger confectionery brand started its ascent from Cambridgeshire (UK) at 11:20am, rising to a height of 116490ft (35.5km / 22miles).
Camera footage, which tracked the Kit Kat’s ascent and descent, was shared via the brand’s social media channels. It was posted on the Kit Kat Facebook page and on Twitter, where users were encouraged to use the hash tag #BreakFromGravity. View footage of the event below: