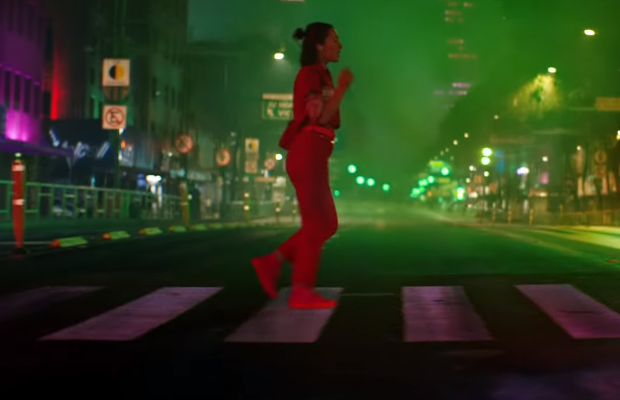 The world is loud and chaotic, with constant sounds and visuals vying for your attention. AirPods Pro brings together the wireless magic of AirPods, pairing that with the power of Active Noise Cancelation. With a pinch, you can snap back and forth between Transparency mode and Active Noise Cancelation, letting you tune-in or tune-out and changing the way you experience the world around you.

In ‘Snap’ you see the switch between Transparency and Active Noise Cancelation mode. A young woman leaves class and steps out into the busy city streets. Overwhelmed by the chaos around her, she puts in her AirPods Pro and enables Active Noise Cancelation. Instantly, the world around her transforms into a nighttime version of her same surroundings, illuminated by colourful, magical lighting. Back and forth, she transitions between the two worlds as she goes about her journey.

The campaign premieres a brand new track released today, ‘The Difference,’ from Australian superstar, Flume, ft. Toro y Moi. The song is a highly-anticipated first taste of Flume’s new music before he embarks on a world tour, headlining multiple festivals this spring. Flume joined Zane Lowe on Apple Music’s Beats 1 on March 11th, to discuss his new single and his involvement in the campaign, creating a unique track composition that perfectly powers the film.

Choreographer Ryan Heffington (Euphoria, Baby Driver) worked with director Kim Gehrig to bring the two worlds to life. To achieve the ‘Snap’ effect, Kim shot the entire film both in the daytime and at nighttime, allowing the seamless transition between the two worlds. Matilda Sakamoto stars in the film, dancing her way through the streets.