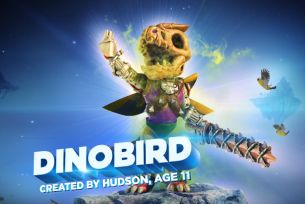 Inspired by kids’ uninhibited creativity and the new Skylanders Imaginators game that allows kids to make their own characters, Activision and 72andSunny are releasing a campaign that puts real kids’ imaginations front and centre.

To create the campaign, Activision and 72andSunny gave kids a sneak peek at the game, which features limitless possibilities in character customisation, and captured their journey of dreaming up their very own Skylanders. In one short titled 'Dinobird,' 11-year-old Hudson narrates the creative process of designing his custom character, which begins with a vampire who evolves into a bird man with a skeleton dinosaur head, and ends up with a skunk butt. A second 30-second spot, titled 'Steak Head,' focuses on 10-year-old Benji, who dreams up a magical sorcerer character that has fire hair, on which he can barbecue a steak. Hudson and Benji’s characters were brought to life to star in the campaign by combining gameplay and animation with the kids’ live, day-of narration from set, producing stream-of-consciousness style films.

While the broadcast films show the internal creative process in making a character, the social films flip the camera, and showcase the kids explaining the inspiration and personality traits of their Imaginators. One of the social films focuses on Brooke, who explains how her character “Felicia” has deceptively-strong bird legs and a cupcake hat that keeps her going to the hair salon to get more sprinkles for her balding head.

"Since we launched the very first Skylanders game, we have received countless letters and drawings from kids all over the world sharing their vision for their own Skylanders. No matter how in touch with our 'inner kids' we might think we are as adults, nothing comes close to the endless creativity that springs from the mind of an inspired kid," said Eric Hirshberg, CEO of Activision Publishing, Inc. "We've turned this year's game into the ultimate blank canvas for kids' imaginations so they can create and play their own Skylanders."