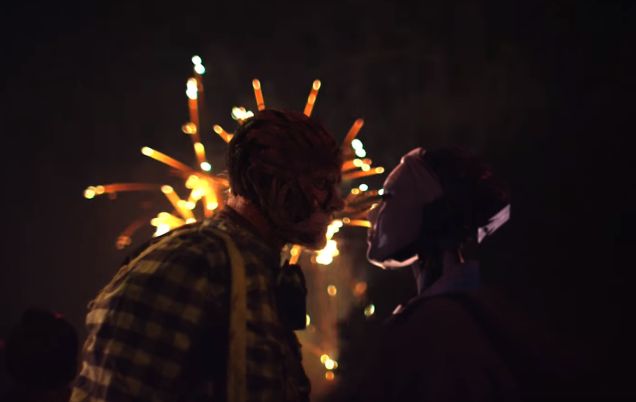 Jack O’Connell (Unbroken, ’71, Skins) is set to reunite with Holliday Grainger (Cinderella, The Riot Club) in a ground-breaking new short film, Robot & Scarecrow, after their recent BAFTA success with short film Home, a unique take on the plight of refugees. The pair also worked together on period drama Tulip Fever, a far cry from their latest project which is set amidst the euphoric madness of a summer music festival.

Created by pioneering south London director, Kibwe Tavares, Robot & Scarecrow is available to view today on new social network Vero, which is supporting emerging directors through a production fund established with DMC Film who produced Robot & Scarecrow. View the trailer below, or click here to view the entire film on Vero.

The film is a modern fairytale with a forbidden love story at its heart. It explores the festival experience, and was shot on location at Secret Garden Party. The stunning visual effects – which transformed Jack O’Connell and Holliday Grainger into a scarecrow and robot pop star respectively - took three years to complete. The film was produced by Daniel Emmerson of DMC Film, the London-based production company run by Michael Fassbender and his producing partner Conor McCaughan. It was co-commissioned by Vero and The Space, and co-produced with Factory Fifteen (Tavares’ studio) and Nexus.

Jack O’Connell said: “Working on Robot and Scarecrow was a massive buzz. Kibwe was awesome at maintaining his vision for the film during the shoot and has brought something to life within the edit which seems to have surpassed what I had originally imagined for this project. Holliday is always delightful to be around and our crew were exemplary at knuckling down and getting the graft done at the Secret Garden Party. Much easier said than done at a huge music festival with over 30,000 party people!  We were amongst some true artists and it's a real honour to be involved with this project. I really hope people take to it well.”

Holliday Grainger said: “It was such a fun experience working on ‘Robot & Scarecrow’. Kibwe's vision manages to capture the simplicity of everyday reality and emotions merged with something creative, original and beautiful. Watching the visual transformation of what we'd shot was amazing but bizarre!”

Director Kibwe Tavares commented: “I feel the story is a weird, but straightforward, love story! The classic tale of two characters unable to be together as one is free and the other completely controlled. It’s also a nod to our youth culture, specifically at festivals. The inspiration actually came from a few years ago when I was due to shoot a music video with Katy Perry. I was researching Katy, watching her music videos and a documentary that followed her on tour for a year and there was a scene where Katy had just split up with Russell Brand but had to go out and perform. That idea of pop stars as commodities interested me. You see this with the robot in the film – she doesn’t have any freedom and is quite literally held back by the lifeline (power supply) that is out of her control.”

Robot & Scarecrow is the first film to emerge from a partnership between Vero and DMC Film to nurture the next generation of emerging directors. Michael Fassbender said: “We’re really excited to be in business with Vero, and want to use the short film fund to build on our model of nurturing and developing relationships with emerging filmmakers.”

Song: ‘Some’ by Nils Frahm, ‘Robot + Scarecrow’ by Gaika