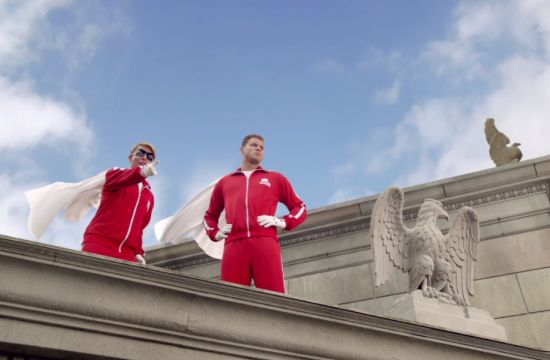 David&Goliath have released a new batch of Kia Optima spots starring superhero duo of Blake Griffin and Jack McBrayer. The two ads “Zipline” and “Apologize to you" promote the Kia Optima as the stylish, feature-packed choice for the practical auto shopper.

Zipline is a typical zany entrant in the campaign. Griffin and McBrayer – who plays the hapless sidekick to the poised NBA star – sling down a zipline and crash through the window of a shocked auto shopper, admonishing his choice of lame vehicles and steering him toward the Optima’s stylish exterior. The similarly silly Apologize to you features a fire extinguisher-wielding McBrayer demanding that a passerby apologize to the crimefighters’ Optima for selecting another vehicle.