Behind the Work 293 Add to collection

Manners McDade catches up with the Berlin-based artist 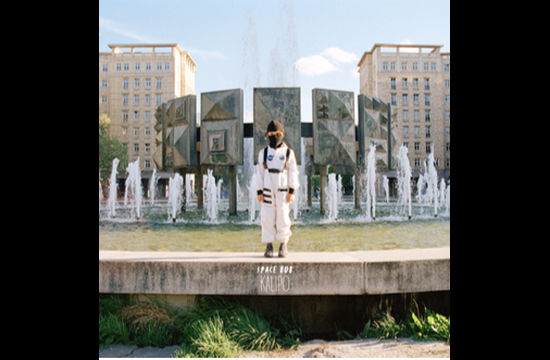 Kalipo is Jakob Häglsperger, a Berlin based producer who made a name for himself as the producer and band member of the German electro punk outfit Frittenbude for which he's produced five albums. The music Häglsperger makes as Kalipo – the curious name came to Häglsperger under the shower one day – goes into a different and less wild musical direction, situated between his passion for Downbeat and raving dance music.

Kalipo’s sheer joy for music shines through "Space Bob' in his lush House rhythms and Techno beats, built micro-samples and analogue synthesizers, as well as the vocals of the collaborators: Simon Dübell ('Tower of Ants'), Nicolas Ford ('Die Wirren der Träumer') and Blindsmith ('Door to Door'). The lyrics, which are pure improvisations by the singers, underlay the Dadaistic mood of the album and render it melancholic, yet positive. Recorded in hotels in Amsterdam, during long hours on aeroplanes and in his own home in Berlin, this album offers a selection of soundscapes from Kalipo’s everyday life.

Read our interview with Kalipo below.

Q> How would you describe your sound and what is the story behind your pseudonym?

Kalipo> I would describe my sound as narcotic. The inspiration and also the formation process often lies in a trance-like state of mind. Basically, I fell for the "four to the floor"! It’s electronic club music with synths, organic instruments, samples and often rather melancholic melodies. I’m just not able to shake it off! My name "Kalipo" came to me when I was taking a shower. Like so many ideas! At the time, my girlfriend was pregnant and she just wanted to eat Calippo ice cream all the time.

Q> What was the inspiration for your new album, 'Space Bob' and how did you approach creating this?

Kalipo> What wasn't an inspiration? Somehow, everything that happens around me affects my creative work. Ideas come from a particular mood and I try to implement them as fast as they come to me. When I'm reading news about the misery of the world, I'm in a different mood than enjoying beer with a pretzel for the seasonal opening of the beer garden. Ultimately, music is just a mirror of emotions. To capture this correctly, I try to implement the ideas very quickly and also a little bit pragmatically. I do not want to lose myself in technology. It all should be about the emotion.

Q> I love the album artwork for this release, can you describe the influence for this?

Kalipo> I was walking around Berlin on the 1st of May (International Workers’ Day) and took some pictures with an analog camera of this annual festival madness. At one point I stood in front of a child in an astronaut costume and a mask, who was standing on Straußberger place. This was the moment when the cover photo was taken. For weeks I was thinking about the album title and repeatedly rejected ideas. All I knew was that I wanted to find something about flying or levitating as it fits in with my music.

When I stood in front of the fountain, I thought that it actually looks like a futuristic flying machine and I asked the child how he would name this fountain? Space Bob was the answer! I thought that was so pretty, direct and straightforward! And I kept it.

Q> What are your plans for Kalipo in the future?

Kalipo> There's already a plan for one more release, but for now, I'm focusing on 'Space Bob' and I'm going to perform in the clubs a lot. So now the shows are on!