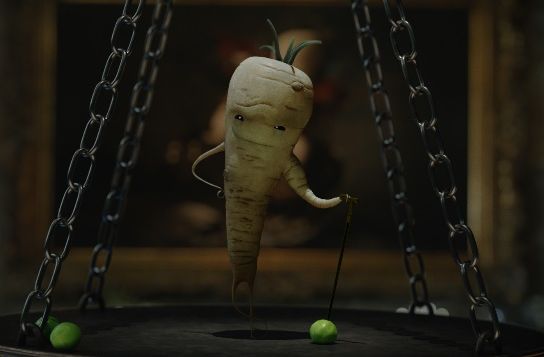 He was nearly toast after a perilous accident, but now, supermarket Aldi has announced that Kevin the Carrot is back, reviving his role as the UK’s favourite Christmas hero with the campaign launching on Friday 9th November at 7pm during ITV News.

The 60 second film follows the Aldi Christmas teaser, which has been playing out to audiences over the last week. Viewers have been left in nerve-wracking suspense, guessing whether Kevin survived after crashing his truck in treacherous conditions in the snow. The 2018 campaign, which will run in the UK and Republic Ireland, has been created by McCann UK following the highly successful debut of Kevin in 2016 and then his return in 2017.

Friday’s 60-second launch advert introduces a new character, Pascal the Parsnip, who is on a mission to cause misery to returning favourites Kevin, his loving wife Katie and their three children: Chantenay, Baby Carrot and Jasper. With fatherly instincts at the root of Kevin’s bravery, he manages to overcome the perils of the Parsnip throughout the fairy tale adventure.

Commenting on the new campaign, Dave Price, executive creative director of McCann UK said: “Everyone loves Kevin the Carrot – or so we thought. Turns out someone is boiling with rage at his success. This titanic battle between Pascal the Parsnip and Kevin is the centrepiece of the 2018 Aldi Christmas campaign. It’s a tale of jealousy, food, rage, and more food; a story with deep roots, sometimes 12 or 14 inches long.”

Award-winning actor Jim Broadbent returns to narrate the festive adventures of Kevin and his family and viewers may also recognise the soundtrack from Edward Scissorhands.

Adam Zavalis, marketing director at Aldi UK, said: “Our customers told us how much they love Kevin the Carrot and want him back this Christmas. Whilst Kevin gets up to more adventures, this time it’s all within the context of fairy tale stories being read to the family and each story brings to life our very best Christmas produce. From starters and turkeys to fresh meat offers and desserts, the campaign reminds our customers that with Aldi’s everyday amazing value, everyone can have a fairy tale Christmas!”

In addition to the Plush Kevin the Carrot and Plush Katie the Carrot soft toys, this the brand has introduced the new Pascal Parsnip soft toy and a Giant (metre tall) Kevin Plush. Christmas decorations, a Kevin and Katie story book and novelty gift mug will also be available to buy from 22nd November in support of Aldi’s charity partner, Teenage Cancer Trust.

Customers may also get a glimpse of the festive #KevintheCarrot trucks which will travel the country making deliveries to stores as part of Aldi’s Christmas campaign.