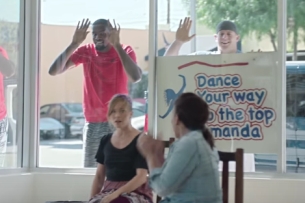 The advertising, created by BBDO New York, presents a twist on fan support, with Durant and Watt surprising fans who are working hard towards their own personal goals. In a series of 30 and 15 second TV spots and a longer online film, we see the athletes holding handwritten signs, similar to those you'd see at a game, cheering on people, and acknowledging the dreams they're pursuing. For example, training for a marathon, practicing to be a roller derby skater, or studying to be a nurse, signs say, “Your dream is just 26.2 miles away,” “Skate your way to the USA Team,” “Mom. Nurse. Student. Hero.”  The message is that everyone’s dream needs a champion, and Durant and Watt are there to remind people that American Family Insurance is here to be a champion of dreams.

“Playing professional basketball was always my dream, and having people support me played a critical role in helping me achieve it,” said Kevin Durant. “I was happy to be able to return the favor to my fans.”

J.J. Watt added, “We finally get a chance to go out there and support other people’s dreams. And when the tables are turned, it’s pretty cool to be someone else’s fan.”

The spots begin airing today, appearing regionally in American Family Insurance’s 19 operating states. Complementing the TV ads will also be print, digital and social advertising, and an outdoor display that will post messages from Durant and Watt in real time in response to tweeted messages received by fans.

"Insurance is about so much more than policies, price and contracts," said Telisa Yancy, Vice President, Marketing at American Family Insurance. "At American Family Insurance, our promise is to provide all of our customers a champion every day, not just in the event of a claim. The role of our brand ambassadors in this campaign is to personify the role that our agents, whom we call dream protectors, and our employees, whom we call dream champions and dream restorers, take on every day."