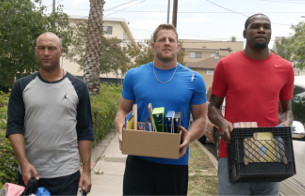 “Customers choose American Family Insurance because we engage with them through meaningful content that reaches beyond traditional advertising, daring them to dream fearlessly, knowing we’re protecting them along the way,” said Telisa Yancy, chief marketing officer for American Family Insurance. “Our brand ambassadors are an important part of this message – supporting and championing dreams, sharing their own stories, struggles and achievements, and providing inspiration by example.”

The advertising reflects the brand’s positioning that being a true dream champion means providing real support, not just cheering from the sidelines. The campaign is built around three stories. In two of these stories, created by BBDO New York, AmFam’s brand ambassadors offer unexpected assistance to hardworking Americans whose dreams are to help others by giving back to their communities. For example, School on Wheels offers educational assistance to children living on the streets. In the commercial of the same name, we see Jeter, Durant and Watt surprise the regional director, Charles, and work with the children on their math, reading and drawing.

In “With Love Market,” we meet Alexis and Andrew, who run With Love Market & Café, making healthy food accessible and affordable. The brand ambassadors make fresh juices and help customers choose their food.

A third film, created by Elite Media, “Hometown Hero,” takes a slightly different approach. Durant surprises James, a young boy from his hometown who thinks he’s waiting to appear on a talk show to discuss how his single mother supports his dream of being a dancer. Durant offers encouragement and shares what his own single mother told him as a young, aspiring athlete.

“Getting to talk to James and encourage his dreams was an amazing moment for me,” said Durant. “It’s important to me to be able to connect with people one-on-one and make a difference, and I'm glad I was able to do that with this campaign.”

“Seeing people achieve their dreams is something that resonates with me,” added Jeter. “It was rewarding to have a part in this and see others’ dreams come to life.” Said Watt, “We’ve had people encouraging us to work toward our dreams throughout our careers. To be able to help people, who are in turn helping others, was humbling.”

The message in each film is, every dream deserves a champion. The stories unfold in a series of long-form online films, which have been edited into :30 television spots as well. There are also shorter-length teasers to help drive viewership, and radio.

Beginning today, the online films will be posted on www.amfam.com/dreams. Thirty-second spots will air locally in 69 markets in 19 states.

Accompanying the films will be “I Know Better” from popular award-winning musician John Legend. Legend’s music was also part of American Family Insurance’s advertising campaign launched earlier this year and has played an important role in reinforcing AmFam’s brand message with its uplifting instrumentals.

“Our brand ambassadors are great examples of the power of dreams and having the support of others who believe in you through your journey,” said Julie Schaubroeck, associate vice president, brand and consumer marketing at American Family Insurance. “We’ve taken our insure carefully, dream fearlessly campaign a step further by seeing our brand ambassadors – who had dreams they achieved partly because of the support of family, friends and community – championing the dreams of others.”

All rights admin. by BMG Rights Management (US) LLC (BMI)

All rights admin. by BMG Rights Management (US) LLC (BMI)