The refreshed advert from Saatchi & Saatchi London welcomes back Doug, a familiar face from his 2020 campaign appearance 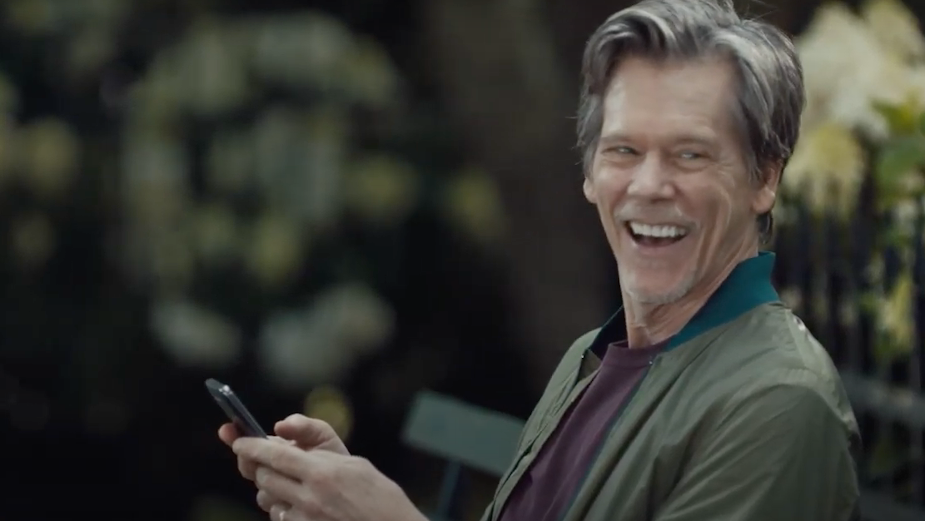 Kevin Bacon and Doug, who was first introduced to EE campaigns in 2020, will return to screens this evening during a variety of TV spots, including the Channel 4 Live Test Cricket at 10.40pm, Celebs Go Dating at 9.12pm on E4 and Monday Night Football at 8.55pm on Sky Sports in the refreshed campaign that rejoices EE as the UK’s most reliable network.

The updated advert welcomes back a dour Doug, who is once again seen gazing at Kevin in envy. In his usual dependable tone, Kevin grabs his new phone out of his EE paper bag and triumphs, “I’ve just got this on EE, still the UK’s most reliable network”.

In despair, Doug looks down at his standard phone in disappointment as viewers hear his envious inner monologue, “Look at him, loving his reliable network, while I have rubbish connection.” Frustrated he continues, “Wake up Doug, he has the world at his fingertips, and all I have is this sandwich”. The lunchtime snack then proves to be just as unsatisfactory as his phone network, as Doug realises he’s mistakenly used “curry paste, not mustard”.

A satisfied looking Kevin notices Doug’s emotional rollercoaster and reminds the viewer; “Don’t be a Doug, get EE or get network envy”.

Pete Jeavons, marketing communications director at BT and EE comments: “It has never been more important to have a network you can rely on, whether that’s to keep in touch with friends, family and colleagues nationwide, or simply knowing you have connection to search, stream, video conference or download without hesitation or delay. Our network has celebrated another year of accolades – but at the end of the day, it’s not what is on our mantlepiece that matters – it’s knowing we’ve created the UK’s most reliable network that just works better. Our customers know it and for those who aren’t on EE, that Doug feeling isn’t going anywhere.”

The refreshed advertising campaign celebrates the brand as the most reliable network, reminding viewers that EE just works better than other operators. According to the latest independent testing by RootMetrics, EE tops the league when it comes to Overall Performance, delivering premium performance across data, call and text, network reliability and speed. Whether uploading to social media, streaming TV and films whilst out and about, navigating on a walk or drive, or simply trying to download files and work collaboratively with colleagues when out of the house, EE provides the enviable connection needed to get on with the day, without worrying about being caught offline.

The campaign begins with a nationwide TV campaign tonight, 15th February 2021 with a 30-second advert during the Live Test Cricket at 10.40am on Channel 4. The campaign was developed by EE’s advertising agency, Saatchi & Saatchi London and will run across TV, video on demand (VOD) and social.