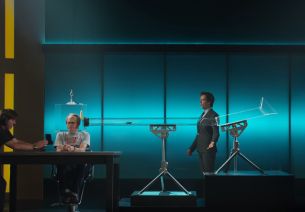 As part of the recent brand campaign launched by EE, highlighting the speed of the network, a new digital execution has gone live. The online ad sees Kevin Bacon hosting a spoof TV show called ‘Android vs Arachnoid’.

In this extended clip, Kevin grabs an unsuspecting member of the audience and challenges him to escape from a perilous situation. If Chip, played by Kevin, can escape, using only his super-smart Nexus 6P and EE’s super speedy network, he wins an evening with special guest Rachel Riley, doing intensive algebra!

In-keeping with the light-hearted tone of the TV campaign, Kevin can also be seen playing a cameo role in both ads.  Donning comedy wigs and glasses, he transforms into a different audience member for each episode.

Spencer McHugh, Director of Brand at EE, said: “We know consumers are using more data than ever and relying on superfast network speeds to download more quickly and stream with better reliability and quality.  Given recent tests have proven our network to be 50 per cent faster than our competitors, we can’t understand why anyone would choose to be on a slower network.  We wanted to illustrate this using some well-known TV geniuses and we’re delighted that Rachel and Stephen are on board to help us get that message across.”