Ketel One Vodka "This One's Mine" 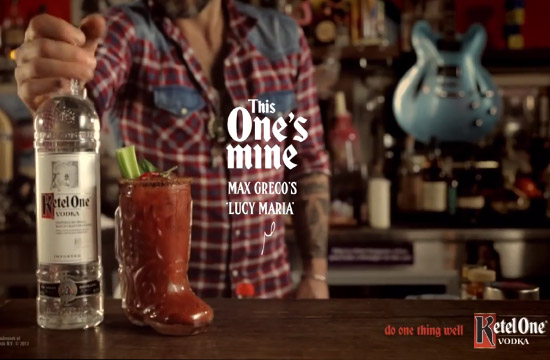 This November, Diageo Australia is celebrating Ketel One vodkaʼs commitment to doing one thing well – creating small batch vodka – with the launch of the brandʼs largest Australian advertising campaign to date, ʻThis Oneʼs Mineʼ.

Selling the brand as the bartenderʼs vodka of choice, The Ketel One campaign, created by Leo Burnett Sydney, focuses on Australiaʼs small bar scene. It steps into the individual world of three bartenders – Max Greco (Vasco, Sydney), Maxwell Ray Finch (The Beaufort, Melbourne) and Piotr Kuzmicki (The Alchemist, Melbourne). It infuses the brandʼs ʻdo one thing wellʼ mentality with these three distinct characters, Greco, Ray Finch and Kuzmicki. The bartenders were influenced by their own personal worlds to create their bespoke Ketel One vodka infused drinks.

Greco looked to his Italian roots – specifically his ʻmamaʼsʼ tomato passata – for his Lucy Maria cocktail, while Ray Finch fused The Beaufortʼs focus on smokey and seasonal flavours to create his Smokey Steve serve. Elsewhere, Kuzmicki took inspiration from his establishmentʼs name, and looked to medieval alchemy for his signature Element of Fire drink, which features ʻliquid goldʼ.

Meanwhile, engaging films hosted on YouTube will bring the three bartenders and their bespoke cocktails to life. The ʻThis Oneʼs Mineʼ creative will also feature across target publications and brand activity will be further supported with PR amplification later in the year.

Commenting on the new campaign, Adam Ballesty, Diageo Australia Marketing Director, says: “Ketel One vodka is currently experiencing significant growth in the on-premise, and weʼre proud to be celebrating this with a unique brand campaign which stays true to our core brand values, fusing the craft of the bartender with that of Ketel One vodka. Australia is one of the most successful markets for Ketel One vodka and we look forward to building on this strong market presence across FY14 and beyond, to ultimately make the brand the most recommended vodka in the world.”

With over 300 years of distilling expertise, the ultra-premium Dutch vodka is hand crafted and distilled through copper pot stills to give an exceptional taste, which is highly regarded by the bartending community.