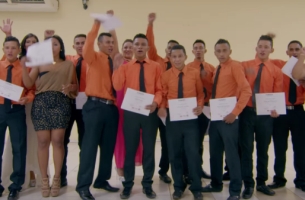 Last year coffee brand Kenco and JWT London launched a project that would change the lives of 19 young Hondurans. The ‘Coffee vs. Gangs’ scheme set out to help educate a team of young people identified as being at risk of being sucked into gang culture and to give them the tools they need to become successful entrepreneurs.

But what happened to these lucky chosen ones? They’ve recently graduated and, having developed their own business plans, Kenco have given them interest-free loans to help them get their ideas off the ground. JWT London have released a series of videos to show how their lives have changed.

JWT London announced the project over a year ago with a powerful Johnny Hardstaff-directed film and multimedia campaign. The film, which featured a collaboration between Honduran rapper Socio and Eclectic Music, was dark and edgy and highlighted the dangers of gang life through the use of animated tattoos.

And as the class of 2015 get ready to build their businesses, a new batch of 20 recruits will be starting the programme this Autumn.

William Bennett, Brand Team at Kenco, said: “At Kenco we have always believed that making great coffee starts with caring for the people that care for the beans. As such we were looking for a way to take this concept at the heart of our brand even further. Some of the countries where we source our coffee, such as Honduras, have serious issues with gang crime. With our expertise in coffee we decided that we wanted to make a difference by launching a pilot project taking young people, venerable and at risk from gang culture, and give them an opportunity to become coffee entrepreneurs and build a life away from gangs. We knew that setting up such a ground breaking project like coffee vs gangs would be a challenge from a multitude of different perspectives and we are delighted to have managed to deliver a successful scheme.”