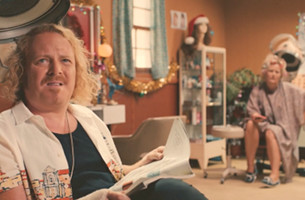 In its latest marketing salvo, Carphone Warehouse takes Keith Lemon down under for an “Aussie Chrissy” in a new advertisement to go on air from 19 November through until 20 December 2015.  Devised by creative agency Brothers and Sisters, the newest burst in the ‘Super Mega Personalised’ series sees the comedian experiencing the “wrong” kind of Christmas in the Australian outback.  In its first use in a UK advertisement, the festive soundtrack is ‘Last Christmas’ by Wham!

Julian Diment, Chief Marketing Officer, Carphone Warehouse said: “There’s nothing wrong with cutesy snowmen and Santas in Christmas ads, but we thought we’d try something different. Keith Lemon in the outback – it’s as wrong as being on the wrong phone deal.”

Keith is mystified as he negotiates the location and residents, and concludes that an Aussie Chrissy is just wrong! Whilst down under, Keith showcases ‘Pin Point’ UK-only deals to some of the locals, explaining the finer details using his best Aussie lingo over his inimitable Yorkshire accent.

Andy Fowler, Executive Creative Director of Brothers and Sisters added: “If I have to watch another ad romancing the depressing truth about the clichéd British white Christmas, I will scream. Thank God then for Keith Lemon and his new buddies doing Xmas in the Aussie outback with a giant spider, a ute - and no cranberry sauce in sight.'

Distinctive online content with a staggered release launch from 10 November includes a “Behind the Scenes” film shot by Keith himself, an introduction to “Aussie Slang”; and, from 1 December a daily viral surprise “Advent Calendar”, up to 24 December.

The latest leg of Keith’s journey in Australia, follows the first advertisements and online content shot in Tokyo, followed by Miami Beach, Florida.  The campaign is directed by Chaplin and Forbes through Hungry Man.