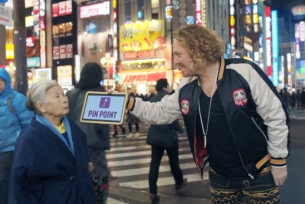 Filmed in Keith’s tongue-in-cheek comedic style, the first series of films sees Keith embark on his Super Mega Personalised world quest to find interesting characters and what makes them different. On his travels he meets a Harajuku Girl, a Japanese ‘Dekatora’ truck driver, two Kendo Warriors and even a Japanese Keith Lemon lookalike – challenging them to use Pin Point to find their ‘bestest possible deal’. In addition, we see Keith behind the scenes offering his unique view of Japanese culture.

Keith says: “I hope Carphone Warehouse sending me on holiday to do an ad for them can change people's view of the establishment. It's not a warehouse filled with car phones, but a shop that has some revolutionary piece of tech called a pin point, which tells you what phone deal is best for you. I fink. Ad looks good anyway. Boy I look handsome!”

Julian Diment, Marketing and Customer Director at Carphone Warehouse says: “We landed Pin Point 20 months ago and it’s had a major impact on our customer experience and satisfaction scores. We’re so proud of Pin Point and ready to shout it from the rooftops which is why we’ve build our Super Mega Personalised entertainment franchise to communicate the benefits in an engaging and entertaining way.”