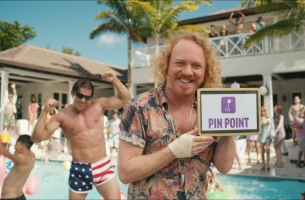 Keith continues his “Super Mega Personalised Quest Fing” around the globe, visiting countries which don’t have Carphone Warehouse, to highlight the issues people face when they’re not on the right mobile phone deal.

Following the first advertisements shot in Tokyo, the new series shot on location at Miami Beach, Florida is once again directed by Chaplin and Forbes through Hungry Man.

In the 60-second TVC “Miami”, Keith meets a beach bodybuilder who barely has enough data on his device to upload selfies; listening to his sobs, Keith tells him to “Man-Up!” admonishing him for making a fool of himself.  Keith moves on in disbelief to a “Baywatch” styled lifeguard as she moves higher and higher up the lifeguard tower struggling to hold her mobile phone high enough to receive a signal.

Keith Lemon explains, “For t' second Carphone Warehouse ad for t' pin point fing they sent me to Miami! Which was a result! Had an ace time. Although I had t' do a million takes of t’ scene with t’ female lifeguard. She couldn’t keep her hands off me. One of t' perks of t' job I guess! The ad looks proper exotic! Chuffed with it. Stayed in touch with t' lifeguard too! Fit!”

Keith continues his own brand of tongue-in-cheek humour, as he interacts with the locals in three long-form VoD films, learning how to become “More Miami”.  The online vignettes, will have a staggered fortnightly release starting with Lifeguard on 7 September.  Keith inserts cheeky branded Pin Point references; reminding viewers in his own inimitable way, of the benefits of network coverage, upgrades and unlimited data.

A separate “Keith On” series of 10-second snapshot films, out-takes of Keith giving tips on flirting; sunbathing; being cool and light-sabers will be seeded virally offering easily shareable content.

Matthew Charlton, CEO of Brothers and Sisters says: “The campaign is aimed at Millennials, people who don’t like advertising. The more this campaign breaks the rules of how advertising and brands are supposed to behave, the more they love it. It’s anarchic, funny and makes a clear point."