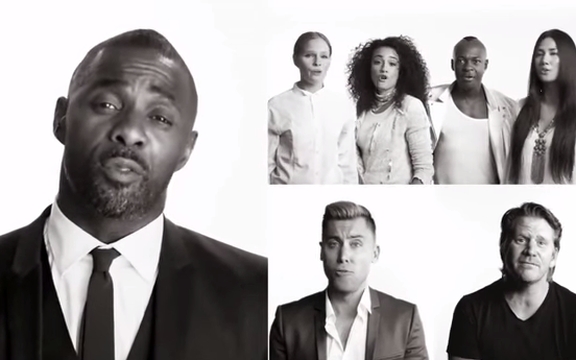 David Guetta, Katy Perry, Courteney Cox, Idris Elba and will.i.am were among hundreds of celebrities and public figures who yesterday launched #IMAGINE, a new UNICEF digital initiative which will enable millions of people around the world to sing along with one of the world’s most beloved and inspirational songs – John Lennon’s ‘Imagine.’

The experience – timed to celebrate the 25th anniversary of the Convention on the Rights of the Child – was made possible by New York-based interactive video start-up TouchCast and Emmy award-winning director/producer, Michael Jurkovac, who was behind the viral video sensation Yes We Can in support of Barack Obama’s 2008 Presidential campaign, and creative agency Matter Unlimited.

To support the #IMAGINE campaign, members of the public will be able to record their version of ‘Imagine’ with John Lennon, using a new version of TouchCast’s revolutionary iPad app, which launched in June 2013 to wide acclaim.

Starting yesterday, when users download the TouchCast from iTunes, they’ll see where around the world other participants have recorded ‘Imagine’ sing-along videos and will be invited to record their own. Using voice activation, the app captures users singing and automatically inserts them into the campaign’s launch video alongside John Lennon and a host of celebrity participants.

TouchCast CEO and founder, Edo Segal, explains the inspiration behind the campaign: “John Lennon grew up and created music in the era of radio and vinyl. His songs changed the world forever and we would like to believe that if he were with us now he would celebrate this development of his message through technology. We’re so proud to play a central role in this vital global effort.”

Participants and supporters are encouraged to share videos of their ‘Imagine’ sing-alongs with the hashtags #IMAGINE and #EVERYVOICECOUNTS. For those who want to enhance their singing voices, Antares has lent their auto-tune technology.

Each video shared will form part of a new version of Imagine produced by David Guetta, to be released on iTunes on New Year’s Eve 2015.

Mr. Guetta commented: “I’m really excited to be working with UNICEF on this incredible new project. Our ‘world’ version of Imagine will be like no other – I am proud to be a part of this collaboration,” said Guetta. “We have to get the word out that every voice counts and every child counts too.”

Director Michael Jurkovac sums up his views on the campaign: “If there was ever a song that could help break barriers and bring people together, this is it.”

With #IMAGINE, UNICEF hopes to bring awareness to the fact that in many countries, children have to imagine having the basic human rights that allow others of their age to be children. UNICEF aims to inspire people to take action to fight for global children’s rights and raise funds via donations from the song’s purchase to finance their efforts.

To participate in #IMAGINE, individuals can follow three easy steps:

- Share with friends with the hashtags: #IMAGINE and #EVERYVOICECOUNTS