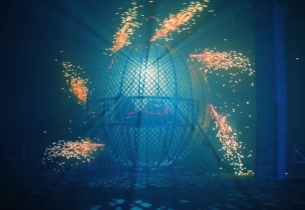 Karmarama has created a new campaign called ‘Where it Begins’ for BBC Radio 1. This is the brand’s first new positioning in five years. The campaign’s ambition is to position the station as a place of exciting new beginnings, helping cement Radio 1’s cultural role amongst its audience.

Living in social and online channels, and supported by a high-energy TV trail, the film shows a girl riding her pizza delivery bike into a warehouse, spraying her uniform gold, getting on a now souped-up moped and speeding around a cage of death through a spectacular firework display.

The campaign encourages its audience to grab life and jump in, ending with the line: “Life’s a ride. This is where it begins.” The idea brings to life how Radio 1 is at the heart of lots of new beginnings; from the starting the day with the Breakfast Show, to kicking off the Summer festivals, as well as helping launch new music artists and new music movements.

Sam Walker, Group ECD at Karmarama says, "A pizza delivery driver riding a ball of death is the ideal metaphor for Radio 1. We've tried to sum up the fearless nature of the station and its listeners."