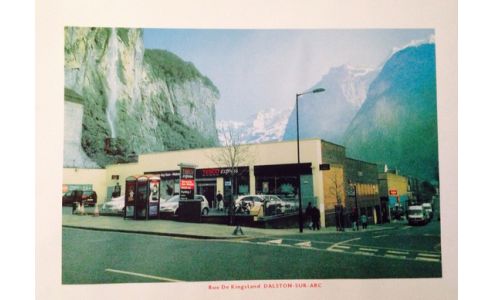 Dave Buonaguidi, the founder and chief creative officer at Karmarama, has created a series of artworks which give the East London district of Dalston a dramatic Alpine makeover.

Buonaguidi, a resident of Dalston, has produced lithographic prints of some less-than-picturesque looking parts of the district, such as Dalston Junction train station and Ridley Road Market, with an imposing Alpine mountain range in the background.

Buonaguidi was inspired to create the print series, titled ‘Dalston Sur Arc’, on a skiing trip in France when he saw a pound shop much like any you’d find on a street in Dalston in the middle of an otherwise quaint Alpine village.

“I started thinking about what Dalston would look like with a decent landscape behind it,” Buonaguidi says.

He took some pictures of Dalston and combined them with mountain range shots and then worked on getting a postcard look and feel to the artworks.

The works are the first project from Buonaguidi’s newly launched creative studio, called Acme, which he describes as “a company that makes everything”.

Buonaguidi runs the Acme studio alongside his fulltime job at Karmarama. He is currently working on make a similar series of lithographs centring on Brixton.

Buonaguidi said: “I have a steady stream of ideas some that I apply at work and others that I can't apply to clients. Acme came about because I had all these ideas and just wanted to do something that might help showcase them. Tech is very easy to use these days and you can create and then show stuff much easier than ever before.”

The artworks are available to purchase on the Acme studio website acmestudio.bigcartel.com