Kaiser Chiefs Release New Video for 'Hole in my Soul'

The video was shot by Parachute director Ed Sayers 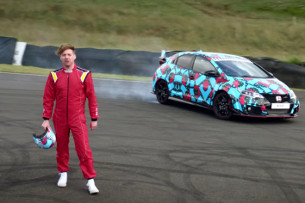 Hot on the heels from headlining a triumphant V Festival, Kaiser Chiefs have revealed the video for their brand new single Hole In My Soul taken from the forthcoming album Stay Together.

Parachute director Ed Sayers shot the video for Hole In My Soul and once more he was making the band do all their own stunts though this time there was no diving but plenty of driving. Sayers commented, "after making Parachute together the creative trust between all the band members, their team and me and my team was just great. We had even more -faster- fun on another jam-packed one day shoot."

Shot on location at Knockhill National Motorsports Centre in Scotland, the video sees the group thrown around by stunt drivers in pimped out Kaiser Chief artwork liveried Honda Civic Type R’s before taking matters into their own hands and racing each other. The band has been poring over the photo finish footage to decide once and for all who the best driver in Kaiser Chiefs is.