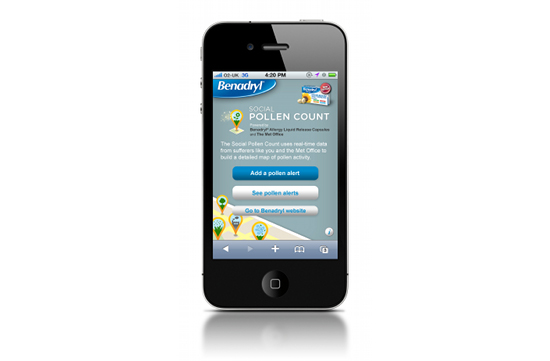 JWT swept the board at last night’s APG Creative Strategy Awards winning a total of seven accolades including the Grand Prix and three Golds. The APG Awards are well regarded and a coveted recognition of excellence in advertising & communications strategy.

JWT London scooped Gold for a paper on Johnson & Johnson’s Benadryl Social Pollen Count, an innovative app that arms hay fever sufferers against pollen by providing them with live and local information from fellow victims to build the UK’s largest pollen alert system.

The judging process was a multi-layered process involving not only a written submission but also a live presentation to a panel of judges and for this effort the author of the paper, David Carr, was also awarded the Google Planning Innovator Award.

Tracey Follows, Chief Strategy Officer and Executive Partner of JWT London said " this is yet more recognition for JWT's innovative approach to brand building, one through which we present some of the biggest brands to consumers in intelligent and surprising ways. Our planning approach at JWT is at the very heart of this, and the APG have rightly acknowledged this tonight".

JWT Puerto Rico office walked away with the Grand Prix for its Banco Popular paper, marking the first time a case from outside the UK has won this accolade outright. JWT Cairo also got gold for its Vodafone "Fakka" and was awarded the special prize for best channel strategy. JWT New York won a bronze for Band Aid.

Of the 136 entries received by the APG in 2013, only 25 were shortlisted for the competition’s final round, which involved presenting the case to the team of judges, led by Adam Morgan, at Google’s headquarters in London.