And Direct Agency of the Year at the Marketing Magazine Awards 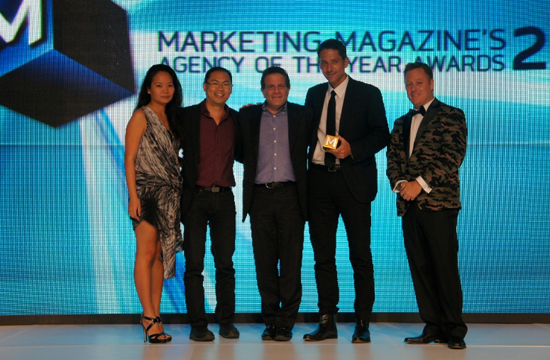 “It’s a great honour. It’s wonderful that our team has been recognized for all their hard work during a year of tremendous change,” said Frank Bauer, JWT Singapore CEO.

JWT Singapore has dramatically grown its account portfolio in the year through new business wins and by expanding existing accounts. Kellogg’s moved its regional business to JWT Singapore, and the agency’s regional remit on FrieslandCampina’s Friso brand grew into a truly global role in 2012 with the addition of markets like Greece, Middle East, Nigeria, Russia and Latin America.  JWT Singapore also recently won the Changi Airport Group and Singapore Tourism Board, two of the country’s largest accounts, and both with global scope.

The agency has took major steps to raise its digital game, investing in numerous new hires with digital experience and a wide-scale digital training program, delivered by Hyper Island, to ensure all team members can help deliver innovative, idea-centric integrated campaigns that cut across every channel.  Valerie Cheng, who was named Singapore’s Digital Creative of the Year in both 2012 and 2011 by the Advertising Institute of Singapore’s Hall of Fame awards, was also recently promoted to Chief Creative Officer, underscoring the agency’s commitment to building a true digital heartbeat.

JWT Singapore’s creative output, meanwhile, was recognized at the highest levels of major regional awards shows.  Key awards include a Grand Prix and a Gold in radio for “DJ Prank” for Lux, at Spikes, proving that we can create world-beating ads in a classic medium for a heritage brand. The agency also took home a Grand Prix at Ad Stars and two Silvers at Spikes for its Red Cross Rapid Rescue app, a life-saving innovation that put thousands of first aiders in a tab.  Rapid Rescue also was named Best Digital Campaign and Best of Show at the 2012 4A’s Creative Circle Awards, and JWT Singapore was named Digital Agency of the Year at that show.  The commendations continued at ADFEST in Pattaya in March, with a Gold and two Silver medals for Rapid Rescue, and three awards, including two Silvers, for “DJ Prank” for Lux, and at the CLIOs, with two Gold awards for Rapid Rescue.

As part of the agency’s mandate to mentor and support young talent across the industry, JWT sponsored Young Spikes at the Spikes Festival of Creativity, and Southeast Asia ECD Tay Guan Hin, who helped found the AWARD School Asia, continued to teach at its Singapore seminar.  The agency also played a key role at industry events worldwide. Tay, who served on juries at Spikes and the London International Awards in 2012, also served as the Chairman of MediaCorp’s Young Cannes Creative Competition and as Chairman of the Creative Circle Awards; Cheng chaired juries at the Creative Circle Awards, Adfest, and judged this year at CLIO and the London International Awards.  Bauer, meanwhile, serves on the exco at the Singapore 4As.

“I’m thrilled with both our Agency of the Year awards.   It’s recognition that we are an agency that creates innovative brand experiences and leverages technology for our clients.  And this can only happen through collaborative effort of planners, creatives, account management and production,” said Cheng.