Awards and Events 197 Add to collection 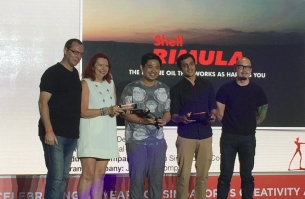 J. Walter Thompson won seven awards, including four Silver Cyber awards for cinematography, storytelling, direction and best webisode, for “Real Destinations”, a global campaign created for Shell Rimula heavy duty engine oil.  The campaign, which marked a new step towards a more emotional marketing approach for the brand, celebrates the dreams and aspirations of truck drivers across the world and the hard work they put in every day to achieve them.  The agency also won two bronze medals in Film for “Real Destinations”, which is currently running in 17 markets across Europe, Asia, Africa and the Americas.

The agency also won a Bronze in Cyber, for best use of music, for “Home”, a campaign that celebrates the commitment to service, and attention to detail, that has defined the Changi Airport brand, and turned it into the world’s most awarded airport – as well as a national icon. Working with Benjamin Kheng, cofounder of the popular Singaporean indie band The Sam Willows, J. Walter Thompson created a song and video to celebrate Changi’s vision and culture, and pay tribute to the nation’s 50th birthday.

The agency also took a Gold in Promo & Activation for “Blood Concert”, a campaign created with legendary Indian rock band Parikrama for BloodConnect that urged young Indians to “scream for rock & roll” while donating blood, earning a chance to see the band live and becoming a part of their next hit single. J. Walter Thompson also won Bronze in Media for We-Fi, an innovative campaign that connected people in need with helpful neighbors who earned free wi-fi by donating to a community charity.

“More than the number of medals, I am most proud of the spectrum of work we’ve won the awards for.  From a great global campaign for Shell, probably the most beautiful online content we’ve created, to effective activation events such as the Blood Concert.  Huge congrats to the team on the scale and scope of this body of work,” said Valerie Cheng, Chief Creative Officer for J. Walter Thompson Singapore, and also Chair of this year’s CCA awards.

“What a wonderful way to wrap up an exciting year for our agency.  We’ve put together a very innovative, dynamic team and it’s great to see their creativity recognized by the industry,” said Peter Womersley, CEO of J. Walter Thompson Singapore.