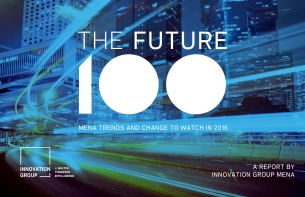 J. Walter Thompson’s Innovation Group MENA released its Future 100 Trends and Change to Watch in 2016, which provides insight into the 100 latest trends across the Middle East and North Africa.  The report uncovers some radical changes - perhaps the most profound of which is the new face of the Arab woman, expecting brands to work around her and her needs, more than ever before.

Authored by Mennah Ibrahim, the 100 trends are categorized into 10 major consumer segments. These include culture, tech and innovation, lifestyle, and luxury.  Some of the 100 trends are homegrown, powered by engaged, worldly and curious Arabs; whilst others, have sprung from various corners of the world, and achieved rapid adoption in the region.

Acting as the silent seamless catalyst across the board, is the smartphone, which in the era of connectivity is no longer just for the educated and prosperous, but is powering benefits in the lives of repressed minorities, particularly the waves of migrants spilling into regional markets.

Taking a quick romp through the many surprising shifts, JWT has highlighted a few that underscore how the MENA consumer is bridging the multiple areas of their consumption patterns and lifestyles, for a holistic approach to decision making.

Arab societies are polarizing into extremes, opening up The Social Chasm between the liberated forward thinking youth and largely conservative cohorts in terms of attitudes, behaviours and financial inclusion.  So, Banking the Unbanked discusses how 41% of adults in MENA claim they are not even eligible to open an account, and Amenable Cryptocurrency looks at how the emergence of multiple new ways to pay, is serving the region where more than 80% of the population remains unbanked.  Many of these innovations are being fuelled by Arab tech startups, which are blazing a trail for Silicon Arabia’s New Frontier that seems to be set on improving the economy.

The Water Credo is a trend which will express itself across multiple facets for years to come. The new World Resources Institute (WRI) rankings, place 14 of the world’s 33 most water-stressed countries in the MENA.  Due to water resource depletion – and in some cases, water outages - governments and citizens alike are working on identifying new solutions to the problem.  Teen entrepreneurs in Lebanon for example have devised urine powered electricity generators, in place of hydroelectric power.

Juxtapose that thought with the discovery of liquid water on the surface of Mars, and you’ll understand why the region is looking at Space-Centric Design, with brands drawing inspiration from science, and regional design thinkers tapping optimism about the future.  But even in this age of futuristic development, 20% of the region’s population remains illiterate, which is why, Comic Culture has become a formidable genre.  A new cast of Arab superheroes are fighting corrupt institutions, social tyranny and crime, because images offer a prime solution to getting a message across.

Channeling lucrative new landscapes, female gamers are driving a whole new rhetoric around Arab women.  Saudi game enthusiast Sara Zahran is working on a government-backed game to teach women how to drive.  And then there’s The New Face of Luxury: Muslim Hijabis, which demonstrates how luxury designers across the globe are taking notice of the stylish, young Muslim woman.  Dolce & Gabbana recently launched a line of hijabs and abayas, which The Atlantic hailed as “both long overdue and worth the wait; the pieces are so gorgeously crafted that they could easily appeal to nonbelievers”.  Forbes went so far as to call it, the brand’s “smartest move in years.”

But it isn’t only women who are challenging traditional ideas of gender.  A growing number of Arab men are too. Menaissance explores how the market for men’s grooming, which grew by 32% from 2009 – 2014, is demonstrating that even the most conservative quarters of the Arab world are experiencing their own version of a male awakening.

Mennah Ibrahim, MENA Director of the Innovation Group, and author of the report commented, “Across all sectors, consumers are differentiating between brands based on their concern for their communities, and will look to brands that supercharge that mission. When you consider that Arabs are living centrally digital lives, and that 55% of the Middle East’s population is below the age of 30, brands need to be asking themselves if they are missing a trick?”

To view a summary of the full report, click here.