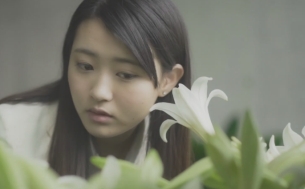 J. Walter Thompson was approached by avex management, who produces Osawa’s music, to come up with an out-of-the-box idea to promote his new work.

“Japanese cities are filled with the clamour of advertising. Nature, on the other hand, offers a therapeutic environment for people. This is the idea behind the song itself. So we decided to use Nature as the medium to promote Shinichi’s new music by getting the plants to ‘sing’,” said Kohei Kawasaki, Senior Creative Director at J. Walter Thompson Japan.

The team worked with Koga, an inventor who has come up with a technology that turns plants into speakers. Devices placed at the stems transmit vibrations that create the sound, which is transmitted from the leaves and flowers.

The team also collaborated with Bergmann, a floral artist from Denmark known for his contemporary flower arrangements. Bergmann turned his café, NOMU, which is located in his flagship store in the Aoyama district of Tokyo, into the “Singing Nature Park”. The popup park was open to the public for three days, from March 1 to March 3, offering the public a unique opportunity to immerse in a garden of sounds, listening to the music of Photosynthesis #1 projected by the plants themselves.

“When you listen to this song it gives healing energy, which is perfect to be played in this park,” said Osawa. “In this park, the music isn’t just being played. People listen to the music through plants - that’s quite something.”