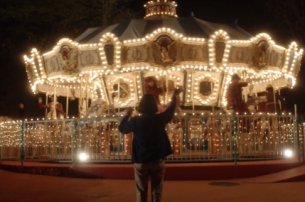 Häagen-Dazs Japan Co., Ltd. And J. Walter Thompson Japan on May 19 launched “Every Day Deserves a Happy Ending”, an online film directed by award-winning artist and film director Chie Morimoto that delivers a fantastical surprise to a hard-working woman who normally brings joy to others.

To create the film, Morimoto creates a real-life surprise for Moe, a cheerful young woman who does her best to deliver happiness each day to visitors to a Tokyo amusement park, where she has worked for the last three years.

Morimoto and the J. Walter Thompson team brought Moe’s family, friends and colleagues together for a magical thank-you celebration, in recognition of her hard work and cheerful attitude. As she leaves work on this particular night, two magical-looking twin children suddenly appear in a spotlight to invite her back to the park; as she enters the park, which is now decorated with colorful lights, she discovers her parents, friends and colleagues, who are all part of a dreamlike choreographed sequence of fantastical scenes.  Dancers covered in fairy lights unfold themselves, slowly lighting up as she walks past; her friends call to her from a Tea Cup ride; a real white horse emerges from a merry go round.   The film, a fusion of documentary and fantasy that Morimoto is known best for, ends with the tagline, “Every day deserves a happy ending.”

Morimoto worked with three popular movie directors, Daisuke Kamisaku, Shigehiro Moriya and Yuko Yasunaga, on the film, as well a senior stylist, Daisuke Iga, and choreography group CONDORS. The team installed special decorations at the park, and the chandelier-bedecked Cups and Saucers on which Moe’s parents and friends ride are decorated with Haagen-Dazs colors.

Moe’s wonder and candid emotion are captured on film.  “I keep doing this job because I like to see the smile of visitors. This wonderful surprise gave me much happiness. It also made me feel glad after all my hard work and encouraged me toward another day. I hope I will repay the favor for everyone came today apart from work,” she says.

The campaign, which is airing on Haagen-Dazs’ site, has hit a chord in Japan; the film has attracted over 1,096,500 in the first three weeks.

“I think everyone deserves a treat after a long day of hard work, not only on special days. So this project intended to express appreciation with a surprise for as many hard working people as possible,” said Morimoto. “Starting from Moe working at this amusement park, I’d like to pass such moments to others and help people who are working hard every day enjoy a happy ending. Let us present this wish to you through the movie and with Haagen-Dazs.”

“Haagen-Dazs, is not just a luxurious dessert for a snack time or after supper. It's a dessert for your day that gives you sweetness, happiness and positive energy for tomorrow.  There is a strong emotional relationship between the brand and consumers that makes this product special in a cluttered category,” said Go Sohara, Executive Creative Director at J. Walter Thompson Japan.  “We would like to keep entertaining and inspiring people by producing other activities based on this new brand message, 'Every day deserves a happy ending’.”