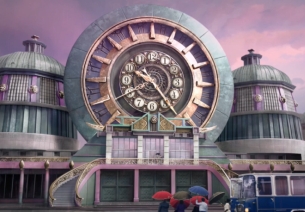 HSBC seeks to inspire people to realise their hopes, dreams and ambitions, and be a natural partner to support them on their journey. This reinvigoration of the brand is being supported by a global jet-bridge print campaign that is currently being rolled out around the world.

The light-hearted and playful film features a group of people being shown round the awe-inspiring ‘The Museum of Procrastination’ by a charismatic guide. It is a strange place of wondrous rooms and magical displays, symbolising good intentions that were never realised.

From unused gym membership cards and unfinished novels, to musical instruments barely played. The Museum stands as a testament to all those pursuits, ideas and inventions that were never explored, or never given the chance of coming to fruition.

The focus of the film is on a young woman, Ellie, who after being guided round the Museum has a moment of reflection about the ambitions she never pursued. From the dream-like museum we suddenly cut to her at her desk at home seemingly inspired, she picks a previously discarded idea out of the waste paper bin, as if about to start turning her dreams into reality.

The film is also running on in-flight media across 7 major international airlines, complementing the new Airport print campaign which is currently rolling out in 20 airports worldwide.

With 24 creative executions, the print campaign sets out to capture ‘the story of human ambition’, and re-awaken the valuable insights behind ‘ambition’ which are fundamentally, and distinguishably, human. The triptych-style executions explore different themes and perspectives on what ambition means to different people in different places; from where ideas come from, to what drives them, to how visionaries see the world. The tone of the creative is warm, inclusive and thought-provoking.

Andrea Newman, Global Head of Marketing - Wealth & Brand Communications at HSBC said: “HSBC’s refreshed brand positioning of Supporting Human Ambition is borne out of what we have always done for our customers – connecting them to opportunities and helping them to achieve their ambitions. It is a specific type of ambition that we want to recognise and champion; with values, purpose and customer understanding at the heart of it. With this campaign we want to poke or nudge our customers to stop and think about their own broader ambitions and reflect on where they are going in life.”

Axel Chaldecott, Global Executive Creative Director at J. Walter Thompson, said: “Across cultures, ambition is a word that has lost its meaning - in some countries it is over-used and in others it is seen as an unattractive trait. This campaign seeks to show HSBC believe we all have ambitions for ourselves and our families, that they are a very positive thing, and shouldn’t become drowned out by the noise and pressure of everyday life.”