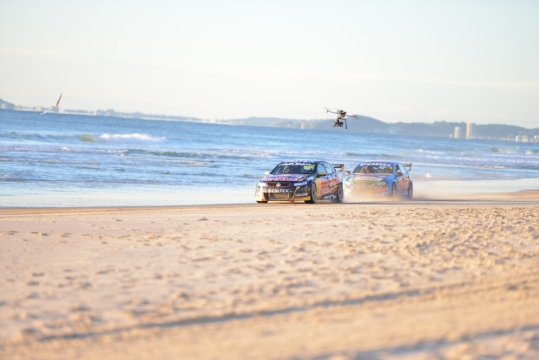 Freelance commercial director Justin McMillan has been busy working on a new multi-purpose camera system to create high-end aesthetics for a number of commercials, including the latest campaign for Tourism & Events Queensland.

Utilising the service of Heliguy, a remote-control stabilised camera system that captures hard to access aerial and land cinematography, the team consists of an experienced pilot trained in pre-planned flight paths who is set-up to have direct access to any D.O.P who then provides specific framing for job requirements.

Heliguy was in fact the first to bring out from Canada for use on local shoots the ‘Slingshot’ system – a wearable rig that carries a stabilised camera head designed so the operator can manoeuver the camera into unique positions.

“I personally love operating this system as it allows me to work with the D.O.P and focus puller to become more immersed in the storytelling because I feel closer to the framing when focusing in on the action,” explained McMillan.

“This technology isn't the be-all-and-end-all of camera packages for commercial filmmaking, however the Heliguy brand isn't about that,” he said. “Heliguy is all about offering up an affordable solution to get multiple camera perspectives through stabilised mounts on both land and in the air.”

In ‘It’s Live in Queensland’ the latest TVC for Tourism & Events Queensland via Publicis Mojo Brisbane, McMillan was commissioned by Taxi Films to direct a TVC to highlight the region’s many aspirational tourist landmarks and events.

For this campaign, McMillan worked with D.O.P Tim Tregoning, editor Simon Njoo and the Heliguy team, who assembled across a ten-day shoot to capture footage of Queensland’s most stunning landscapes including beach and coastal sites, underwater montages, natural forests, cityscapes and rural outback scenes.

“I've recently had a run of outdoor tourism shoots where I’ve been able to put all the new toys to the test. The 90-second director’s version of the Tourism and Events TVC best showcases how our technology works in harmony with small production crews in scenes where we needed to shoot on land, in the air and underwater – and all in the same lighting conditions.”

As a freelance director, McMillan has worked with a number of production houses putting Heliguy to the test on campaigns for Sunshine Coast Tourism, Toyota, New Zealand Tourism, Qantas and RACQ.

“I like the idea of being a freelance gun for hire and if the situation works I'm happy to come on board to collaborate with creatives and production crews looking to explore a new and exciting approach to film making.”