Karmarama produced 33 idents for Just Eat, where real life restaurant partners are thrust into the limelight at the swipe of the app 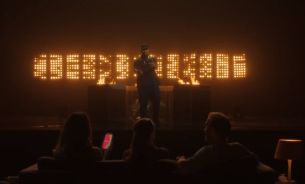 Just Eat is delivering even more magic to mealtimes with its sponsorship of one of the UK’s biggest television shows The X Factor. Now in its second year, the sponsorship continue to shine a spotlight on the local restaurant talent that the Just Eat app unlocks through a series of entertaining idents, starring staff from restaurants available on the Just Eat platform.

This concept of Spotlight on the Stars was developed by creative agency Karmarama, who has produced 33 sponsorship idents. The idents will air every weekend from Saturday 1st

September 2018 to Sunday 2nd December 2018, with the show’s presenter Dermot O’Leary as the voiceover artist.

Just Eat put the the magic makers of the business - its 29,000 restaurant partners, which serve more than 100 different types of cuisines - at the heart of The X Factor sponsorship for a second year, but this time round, showing that every time you swipe the app to order a takeaway, you put a spotlight on the takeaway restaurants.

Budding performers who usually cook, serve and deliver the nation’s favourite takeaways then perform their unique talent, showcasing the flair that goes into creating and delivering a perfect takeaway night in.

The idents showcase a variety of different locations - from a theatrical setting of a Chinese street food market to a supersized pizza box used as a stage - as the star chefs and delivery drivers sing along to pop classics including Spinning Around by Kylie Minogue, Down With the Trumpets by Rizzle Kicks and Feel the Love by Rudimental featuring John Newman.

Last year’s sponsorship proved very successful for Just Eat. Not only did it increase awareness of the online food delivery company, it also led to a record night during The X Factor Live Finals.

With nearly half the population yet to order food online, Just Eat aims to continue attracting consumers to experience the magic of ordering a takeaway through the Just Eat app - from the choice of well-known brands and independent restaurants available locally to the simplicity of placing an order. The X Factor sponsorship, alongside Just Eat’s cross-channel marketing campaign ‘The Magical World of Just Eat ’, aims to build an understanding that customers can have the food they want, how they want it and when they want it.

Ben Carter, UK Marketing Director of Just Eat, commented: “We’re proud to be sponsoring The X Factor for the second year running and shining a spotlight on the local food talent that the Just Eat app unlocks - our restaurants. By giving them the chance to shine on prime time TV, we’re able to champion the magic that goes on behind the scenes in kitchens all over the country. Just Eat and The X Factor is the perfect combination for Saturday and Sunday nights - bringing the nation great food and great entertainment.”

Just Eat worked with media planning and buying agency m/SIX to secure the sponsorship deal for a second year, which continues to be one of the biggest and most high-profile on British TV and includes the broadcast, app, Live Final and the annual tour.

The weekly digital series Just Eat’s Xtra Bites will also return, hosted by TV presenter and radio DJ Becca Dudley as well as a brand new co-host Tinea Taylor. The show was a huge success last year, enjoyed by millions of X Factor fans, and will continue to bring all the backstage gossip from The X Factor across the Just Eat social platforms.

Project Name: Spotlight on the Stars for The X Factor 2018 Sponsorship