This year 27 Gold, 42 Silver and 123 Nominations were awarded from a total of 720 entries from 24 European countries 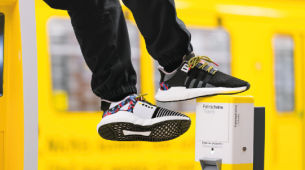 Berlin’s culture is based in anti-establishment, which includes being anti-BVG.

The Best of Design and Advertising Awards

In total, there were 720 creative works entered into the 27th edition of the ADCE Awards. The jury was comprised of 62 leading creatives from 20 different countries.

The 27 winning Works awarded “Gold” in the different categories were:

- TV/Cinema Commercials: “Decisions” by Sra Rushmore(Spain) for International Committee of the Red Cross.

- Websites: “Flint is a place” by Guillermo Brotons and Frederik Delmotte (Spain) for Zack Canepari.

- Interactive & Mobile - Any Other: “Real Orgasms. The exhibition” by Proximity Madrid (Spain) for Bijoux Indiscrets.

- Best use of technology: “The Soundbook App” by Jung von Matt/Limmat (Switzerland) for Swiss NordSüd Verlag.

European Student of the Year:

Winning work will be showcased in the ADCE Annual 2018 and through a touring exhibition around Europe. For a full list of winners, visithttp://www.adceurope.org/awards.

Under the leadership of ADCE President Ami Hasan, Chairman of hasan & partners, the 2018 juries were led by: