Their spot featured in the game utilises high-end, abstract animations 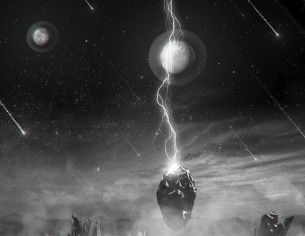 Given the name of the game, Odyssey Creative Director Oz came up with the idea of using onyx, the mineral. "This was one of four concepts we pitched to Odyssey, and the one they loved the most," he says. "We proposed having a car be born out of a rough array of black crystal in a strange alien landscape, to reveal a smooth curvaceous black car.”

The theme, to him, made sense: “When we think of cars, we often think of strong, solid objects – but the sheen on them is a nice contrast. There’s something fluid and delicate about the surfaces of cars. I think the motif of onyx enabled them to draw out both those contrasting properties: shiny, yet solid.”

The references the company were given were all high-end, abstract animations. Odyssey was happy for Jumbla to not feature too much of the car, treating it as more of a reveal at the end.

In terms of the colour palate, Odyssey was drawn to one of our storyboard options which had strong black and white contrasts. This was a helpful guide for Jumbla to follow. We then created a rough animatic to get across the narrative, although they were happy for this to be loose and abstract.

Once this was approved, Jumbla got to work on the final project. Oz says, “We had a phase of experimentation to find some approaches in 3D that worked well. These assets were done in Cinema 4D and rendered in Octane, with a lot of compositing done in After Effects to create the surreal environments.”

He says one of the biggest challenges – but most rewarded to overcome – was creating the “exploding” onyx.

“We tried a number of ways of doing this using dynamics, but ended up using the voronoi fracture, broken apart with effectors. We used a couple of 2D animators to get a sense of timing and pace and then recreated this in 3D.”

Odyssey was a great client to work with, as they encouraged us to work without limitations. “Often our only feedback was to use our creativity to push it further, each time. This made it a really fun project to work on. It meant everyone was working in overdrive – forgive the pun – to pack in more shots and details,” says Oz.

The happiness went both ways! The team at Odyssey said it was stoked with the final result.

The product manager, Richard, says, “We played this video at the start of our presentation to get people engaged and excited about our gaming concept, so they could start asking questions. Essentially, we wanted them to say, ‘what is this?’”

“The project served its purpose really well. It visually impressed and roused lots of curiosity. Our audience could see that we’ve put a lot of work into our concept, which helped them become particularly engaged in our presentation that followed. It'll look fantastic in the game, and we're really excited for our players to see it.”