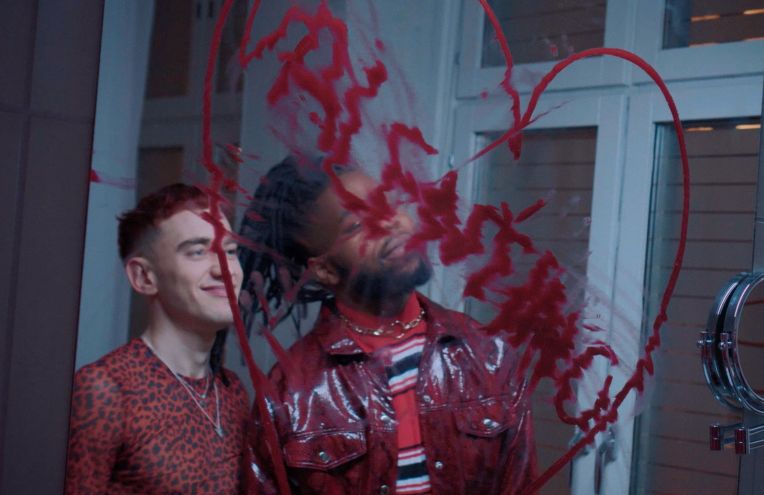 This anti-Valentine’s music video from Olly Alexander, MNEK and director Jordan Rossi is all you need to get over the F***boy in your life...

We’ve all been there, sitting alone on Valentine’s Day either perpetually single or having been burned by that person you thought was ‘the one’. Well, fret no more as Olly, MNEK, and Jordan have crafted a video that teaches you how to purge and dispose of that piece of trash you called a boyfriend.

Opening on a beautiful Valentine’s themed hotel suite, Olly’s lover is MIA this year - as a post-it note on a giant teddy bear reveals. He’s completely heartbroken, in need of a BFF, and some serious TLC... Enter MNEK who tries to pull Olly out of his rut and convince him he doesn’t need his nefarious ‘Valentino’ anymore. The pair take it to the extreme and go full-blown anti-Valentine’s Day; trashing the hotel suite, having luxurious champagne baths, and destroying the teddy bear.

Discussing the project, Jordan says: “This was my second collab with MNEK and my first with Olly. They are both an absolute dream to work with. Not only do they bring an incredible energy and sensibility, but they’re also super creative. Nothing is off limits - there are no bad ideas. This made for a truly creative process on set. Everyone pitched in and got their hands dirty. It’s a really healthy, collaborative way of working, and I loved every second.”

Not only is this video fun and ferocious, it’s also a true LGBTQ collaboration in front of and behind the camera. The track ‘Valentino’ was written by and features two of the most prominent out gay musicians in the UK, singing about their boyfriend troubles.

On top of that, several LGBT collaborators spearheaded several key roles in the team, including director-producer Jordan Rossi, known for his '70s-disco inspired video released last summer; editor Samuel Marr from The Quarry; and film colourist Oisin O’Driscoll from The Mill Chicago.

Speaking on this Jordan says: “It wasn’t actually a conscious thing. I went after the best people for the job; we needed Sam due to his serious skill and our seriously tight turnaround, and Oisin’s unique approach to colour was perfect for this narrative. Both are super talented. But it’s quite cool to realise that five of the key components of this video were from the LGBTQ+ community.”