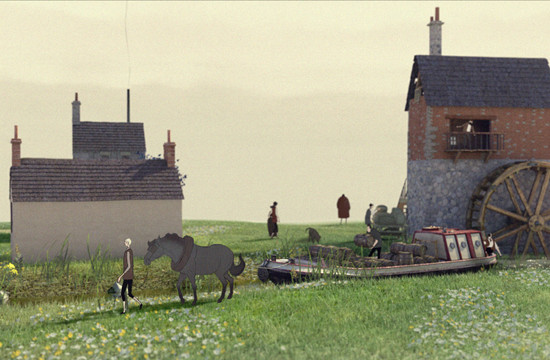 BAFTA winning Studio AKA director Marc Craste creates a delightful, Patrick Stewart-voiced film about the Reverend Henry Duncan and the history behind the building of the TSB bank.

The result of a collaboration between Syudio AKA's Marc Craste and Damon Collins at Joint, the film reflects the historic values of TSB's founder Rev. Henry Duncan, and his drive to enable ordinary working people to overcome poverty.

The story commences over a simple wooden table at the original Ruthwell Parish Bank branch in 1810. As the years progress we see how the bank enables local working people to build their lives and establish a fully functional community through years of prosperity and - as we literally see in the film – the expansion of businesses and livelihoods. The hardships that follow in the down turn are depicted as a storm which brings the world to a sudden stop, but despite this, there remains the reassurance that even in uncertain times, the banks dependable values have remained the same.

In seeking to craft a film which celebrated the combination of traditional ideas with contemporary application, Marc chose to combine the hand crafted artistry of 2d hand drawn character animation within a stunningly integrated use of 3D CGI sets. The journey through time is reflected in the film's opening shot - an unbroken take which lasts a whopping 95 seconds - until the turning point in the films narrative. Marc’s use of a constantly circling camera provides the momentum and sense of optimism that drives the piece and this simple device is mesmerising throughout the build of the story. The film is full of wonderful nuances and details which have been complimented by a fantastically uplifting score, composed by Anne Dudley and recorded with the Chamber Orchestra of London. With subtle sound design from Anthony Moore and Tom Joyce at Factory the film showcases the artistry of the animation & technical talent at Studio AKA who came together to craft such an exquisite piece of work.

A 90 second version of the film will be screened in Cinemas nationally from 13th September, with the full 2.5 minute version debuting on the web September 8th.