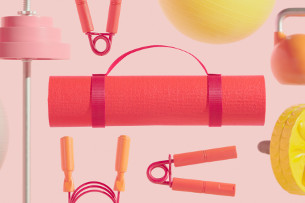 Johnny Kelly has created five beautiful films for ‘Apple Health’ promoting Apple’s new app released in September 2016.  Each film highlights a different aspect of health focussing on encouraging us all to live a more healthy and fulfilling life.  Johnny’s clean, clear style, where he uniquely merges 2D animation, CG and live action, captures the essence of living well and taking care of our health.

The 5 films illustrate the use of live action and stop frame animation combined together to create an orthographic feel.  To keep this ‘flat’ look, Director of Photography Matt Day and his team built an incredible lighting rig which rotates 360° around a central tabletop, which is also spinning at the same speed. The only CG is in the ‘sleep’ film in order to capture the spherical atmosphere of the moon.

Director Johnny Kelly said, “In the first conversation we had with Apple I remember they said something that really struck a chord - how if you sleep badly, you tend to eat badly the next day, you're then less likely to exercise and as a result you won't be thinking as sharply. Their app looks at your health from a variety of perspectives, and shows you this; in effect how one thing leads to another. This became key to our visual approach, which we developed as a really collaborative production.”

“A tricky aspect was explaining the technique. I could write something like "the camera pivots around a bicycle wheel, revealing a frisbee" but no amount of explanation or sketching could really explain that until you actually see the movement. This movement and flow was crucial.  Jumping from 2D and 3D animation to live action and back again continually meant that we needed to have a really strong 3D animatic to work from. Our 3D camera was then used to control the live action camera ensuring a fluid movement as you cut from one medium to the next.”