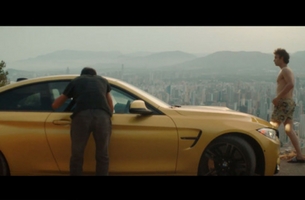 A lynchpin of the Parisian music scene, Jimmy Whoo is a renowned DJ, producer, and curator, and the founder of label Grand Ville Records.  Whoo’s 2017 mixtape, Motel Music Part II, is the culmination of his time spent with other artists on the scene, and works in a mix of jazz, soul, and hip-hop influences, whilst maintaining the modern electronic feel for which he’s best known.

Of the film (produced through Hexagone Paris) Johnny said: “The unapologetically feminist short revenge film ‘Motel Music Part. II’ looks to debunk the myth that a car can get a man laid, taking aim squarely at the macho contemporary cinema of Winding Refn’s ‘Drive’ amongst countless others, and in so doing offering a refreshing recalibration of the stereotypically masculine relationship between cars, violence and sexual conquest.”

“Far from feeling like the end of something, in exploring gender politics, in examining the social trauma of almost a century of commercial advertising (something this film’s director and its producers know more than a thing or two about) and in seeking to exhume the emotional truth from industrial output, ‘Motel Music Part. II’ is a beginning, a first step into the misogyny of cinematic glamour.”

“Put most simply, ‘Motel Music Part. II’ is a contemporary fable of human agenda and industrial product, a tale of predators and prey.”

Check out more of Johnny’s work here HERE. And you can listen to Motel Music Part II HERE.