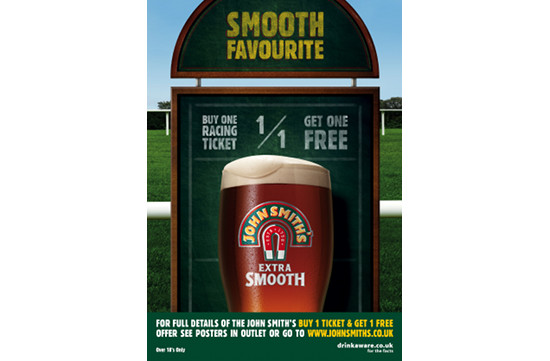 Integrated marketing agency Space is enhancing John Smith’s long-running association with horse racing through its ‘Smooth Favourite’ campaign, an on-trade initiative designed to give drinkers a chance to ‘buy one ticket and get one free’ at 28 jump and flat racecourses across the UK.

The ‘Smooth Favourite’ creative theme was developed by Space, pairing top quality racing and John Smith’s Extra Smooth in over 2,000 pubs and bars across the country. Space’s campaign kits hit on-trade outlets this month, supporting the popular horseracing promotion that runs until the end of the year.

Kits include posters, fixture lists and sign-up forms, brought to life with green chalkboards featuring a selection of calls to action. The kits allow landlords to take ownership of the BOGOF offer and invite and reward regular customers with a group day out at the races. Working with John Smith’s, Space has developed permanent point of sale items which can be used to dress and establish the pub as a ‘hotbed of racing’. Items include a wall calendar that provides a list of all the races planned for 2014.

Customers can choose from any of the 237 race days at participating racecourses across the country. The campaign is also featured on the John Smith’s website where tickets are advertised with instructions for all consumers to purchase. John Smith’s ticket offers of this kind are an important strand of the brand’s horse racing activation led by Space.

Mat O’Brien, creative director, Space added: “Watching the horse racing is a hugely social occasion, where we know drinkers like to share over a pint of John Smith’s Extra Smooth– or as we’re calling it – the ‘Smooth Favourite’. The unique ticket offer continues to work well for John Smith's, offering both consumers and licensees the opportunity to go to the races at an affordable cost whilst strengthening John Smith’s ties with horse racing.

“The creative execution was designed to put the John Smith's drinker at the heart of the racing occasion. Using a traditional bookies board and chalk iconography we wanted to create a classic racing vista with John Smith’s as the front-runner and also directly communicate the promotion.”