John Cena and Stephanie McMahon Dish Out Lessons on Creativity, Branding and Media to Adland

Awards and Events 594 Add to collection 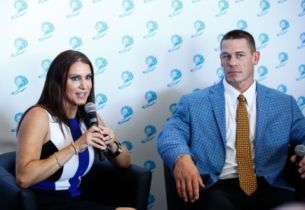 At first glance, it may seem that the advertising industry and the world of pro wrestling don’t have all that much in common – flamboyant characters and long held grudges aside, that is. But last week WWE’s Chief Brand Officer and wrestling character in her own right, Stephanie McMahon headed to Cannes Lions along with WWE superstar and actor John Cena to smackdown some surprising insights and lessons. WWE (World Wrestling Entertainment), after all, is a global megabrand and a media outlet currently valued at $1.2 billion and since its conception in 1952 has amassed extensive experience with fan engagement, brand integration and storytelling.

LBB’s Laura Swinton headed to the Speaker’s Corner to hear what they had to say.

Stephanie on The Grand Plan

"There were really three key messages. One was ‘content first’. You have to make sure that you have great content. In WWE that means you have to have relatable characters and compelling storylines, because ultimately it is protagonist versus antagonist… only our conflicts are settled in the ring. Then you need to utilise your content ecosystem because people are using different platforms, different devices, and they want a customised experience. They don’t want to have to tune in at a certain time to watch their content. So you make it available to them anytime, anywhere on any device and leverage all of those points of opportunity so they can have a different entry way into your product. And then, thirdly and most importantly, you need a brand that has purpose and value. There’s a lot of great content propositions out there. Why should anyone care more about your brand than anyone else’s?"

"I think the biggest development in the last couple of years has been the WWE Network, which is our OTT (over the top) subscription service. It operates the exact same way as Netflix and we like to say, ‘it’s like Netflix, only better’. Not only do we offer VOD content, of which we have over 5000 hours and we can continue to add to that library, but we also have original content like swerve or camp WWE and our live pay per view events like WrestleMania. It is an incredible proposition for our fans because in the US they would pay north of $60, and now they get all these pay per view events for $9.99 a month, plus all this incredible content. The reason why we went OTT is that we’ve been investigating linear distribution models for a cable network and what we found when we started really digging into the research was that our fans were consuming more than five times the US norm of video content. They were watching Hulu, they were watching Netflix.

"One last point on the WWE Network; our network is now our fastest growing and second most profitable business so the strategy has been working."

"We are exploring that and we actually have a partnership with Samsung and a few others that we’re definitely exploring for content. I’ve seen some of the early renderings and it is so cool. I’m a fan first and foremost and I think you have to be in our business. To be able to walk down the ramp and get in the ring, it’s the most unbelievable experience and I can’t wait to see how that unfolds. Of course we’ll do all of our research and due diligence, if it makes sense for us from a business standpoint we’ll continue to evolve that model."

"We look to do as much as we possibly can for our partners. One of the more intriguing partnerships we had was with the brand Totino’s Pizza Rolls and we utilised our character Sheamus, who is larger than life. He is 6 foot 5, 280 pounds roughly, he has very, very pale white skin and flaming red hair and a flaming red beard. And that is important because we did an integration on Facebook where our fans were actually creating pizza rolls that looked like Sheamus… it really worked and it increased their engagement on Facebook and really over-delivered for General Mills.

"And then you couple that with the spot which feels like a simple integration; when that then aired during the live event our fans were so engaged and entertained by what we did that they started chanting, ‘Pizza rolls! Pizza rolls!’ We can’t guarantee that’s going to happen but that’s the way our audience engages. That’s why we see an increase of 92 per cent brand message recall for brands that integrate with WWE versus the cable norm in the states."

"It’s pretty simple. I have a great job and it is mine to mess up. Nowadays if you are an active part of social media you have to be accountable for all your actions. That is the sacrifice that comes with working your dream job and a lot of people don’t understand it. They think they should just be able to go out and do whatever they want. That is not the case, especially in our industry where the only successful individual brands are the authentic ones.

"I am who I am on television, it’s just a different sort of intensity. But that resonates with people. I am that guy. I’m very driven, I’m very sensitive, I truly don’t stop working, I try my best to help people in terms of giving advice."

"This is where I could not only spend 45 minutes, this is where I could do a week-long presentation. I am obsessed, absolutely obsessed with the storytelling. In our industry, there are superstars who want to be able to dictate the story. ‘My guy wants to do this, I want to do that’. I have never done that; I love being told, ‘OK the story is going in this direction’ and then I take my paints and my canvas and I go create.

"I am super obsessed to the point that we could take it as far down the rabbit hole as you want to go. It is the reason that I returned to WWE; the ability to create, the inspiration to be an artist. Stephanie referred to it as a performing art and it is just that. You get your basic outline and you, as a professional, can use the tools you know to create a believable atmosphere for everyone else to have fun. It’s just awesome. I’ve been doing it for so long. 300 matches a year for 15 years and that would seem like Groundhog Day, but every single day is new because every single day you get to create something new. It’s fantastic."