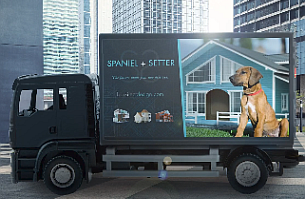 Dice, the job website for technology professionals, has a novel proposition to help job seekers get noticed: We’ll put you on a billboard—if you can hack your way into it.
On April 5th, Dice activated seven mobile billboards in an interactive hack-a-billboard competition. Successful hackers will win bragging rights and their name showcased on the billboard itself, plus some serious geek swag. The Can You Hack It campaign, created by independent creative agency Barkley, is targeting tech corridors in NYC, San Francisco, Atlanta, Salt Lake City and Charlotte.  The actual trucks will target those markets but a large media buy will bring people into the mix from all over the nation. The banner ads have the tag "hackthisad.com" which takes the user to the game centre where people outside of those markets learn that there are actual trucks driving around.
Initially, the mobile billboards appear to be advertising somewhat outlandish products and services of four fictitious companies, like Sal's Scissor Doors who will put scissor doors on anything or WheelFree commutes for those who choose to commute by air, but the ads appear to have technical glitches that will ultimately reveal the ‘Can You Hack It’ message and the URL, www.hackthisbillboard.com.
This website takes the user into the game centre, designed to replicate a mobile truck’s content management system (CMS). The CMS can be hacked by guessing the correct passwords for all 13 levels, with each level offering a series of challenges that include informational search, crypotogy, decoding, mathematical problems and more than a few broken lines of code that need to be fixed.
“Tech professionals are in high demand and don’t necessarily respond to traditional ads the way other groups do,“ said Katy Hornaday, Executive Creative Director, Barkley. “We wanted to help Dice separate the skilled tech professionals from the posers in a non-traditional way.”
The top 4 at the end of the activation will be given their choice of lavish but silly tech billionaire prizes:
Custom scissor doors installed on your car
A super fancy $1,000 pizza
A custom built pet mansion
A helicopter commute for a day
The mobile trucks will be blanketing the five markets from April 5 - 10. Dice has engaged Reddit with its media buy, including a Reddit homepage takeover as well as takeovers for some key sub-reddits that align with Dice’s target audience. Below are video links as well as credits. Please let me know if you’re interested.
view more - Creative