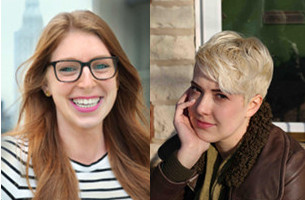 Deluxe Creative Services today announced the hiring of Producer Joanna Woods, who will oversee projects in Chicago for co-located sister companies Beast, Company 3, and Method Studios. Kendall Fash, who was previously in the producer role, has been named National Director of Marketing for Beast. She will remain based in Chicago.

"Joanna and Kendall are both very talented, driven, and passionate about what they do," shared Peter Hullinger, Managing Director, Deluxe Creative Services Chicago. "Our Chicago outposts will definitely benefit from adding Joanna to the production team, and from having Kendall drive our Beast marketing and events across the country."

An accomplished audio producer, Woods has worked on TV, radio, video, and web content for brands including Allstate, Wal-Mart, Coors Light, Sprint, KFC, and more. She comes to the team from Music Dealers, where she worked closely with agency and post house producers, as well as in-house engineers; she has also held production roles at Another Country Studios and Chicago Recording Company.

"It's rare in Chicago for one facility to have centralized production encompassing editorial, finishing, color, and graphics all under one roof. Beast, Company 3 and Method all have great standing in our community in terms of both caliber of work and client relations, and joining this close-knit team is an incredible opportunity to work with clients from start to finish, and to collaborate with top-notch talent across all aspects of production," said Woods.

Fash has been with Beast's Chicago office for five years, most recently in the role of senior producer across Beast, Company 3, and Method. Now as Director of Marketing for Beast, she will oversee marketing initiatives for all seven Beast facilities across the U.S. Known for her positive energy, Fash has successfully shepherded countless projects through the Chicago office, working with leading brands including Nike, McDonald's, Michelob Ultra, and Yelp, and top ad agencies in both the local market and nationwide.

"I've enjoyed my time producing over the past five years, and I look forward to becoming more involved with Beast's other offices on a strategic level and to continue nurturing the Beast brand in a different capacity," commented Fash.