Joan: A New Agency for a New Era in New York City

Lisa Clunie and Jaime Robinson, founders of Joan, discuss their refreshing approach to running their first creative agency in NYC 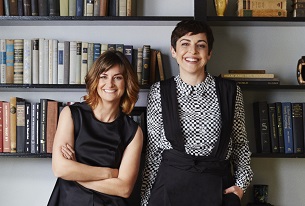 It’s no secret that New York has been one of the industry’s most powerful and longstanding markets. With commercial prospects and ingenuity practically dripping from every brick that makes up The Big Apple, the myriad of creative opportunities is huge. However with traditional agency models being challenged from all angles - with ever-growing channels of communication, people calling for diversification and pressure to make social changes -  will new agency models pave the way when it comes to revolutionising the way advertising works in legacy markets?

This year industry heavyweights Lisa Clunie and Jaime Robinson took the plunge to set up their first creative agency, Joan. They tell us the agency name derives from the Joans throughout history who have completely changed their landscapes - from rock and roll to comedy, to helping put a new face on the protest movement of the ‘60s, all the way to perhaps the most famous Joan, who triumphed on the French battlefields. When you speak to Lisa and Jaime about their new model, it’s not hard to believe they might change the advertising skyline in New York City.

Grabbing them just before the Thanksgiving rush, LBB’s Phoebe Siggins gets a breath of fresh air talking to the duo about how Joan came to be and what it plans to do…

LBB > When did you both first meet and what made you decide to set up Joan?

Jaime Robinson, Joan Co-founder & CCO > Lisa and I have known each other on and off for years and we had wanted to work together for quite some time. Independently, we also both had the dream of starting our own agency, so after reconvening last fall, we got on to the topic of the type of agency we’d like to build. We quickly realised that we both wanted to do something different to the traditional agency model.

It’s no secret that our industry is losing talent to other sectors like tech and entertainment and that the conditions for clients have changed radically in the last few years. We still very much believe that a third party, independent point of view on marketing and communications continues to be beneficial for a client. So we sat down to this amazing lunch and started asking questions about why our industry is the way it is. We wanted to make a model that really honours this industry, which we love, but addresses the things that aren’t working and aren’t working from a wider world perspective. As we started to ask ourselves these questions, we realised we could do something about it and we addressed them all from start to finish.

LBB> You have a unique marriage of skills with Lisa’s publishing and agency background and Jaime’s creative background. How does that work in terms of your model?

Lisa Clunie, Joan CEO & Co-founder> It’s interesting because if you’re going to build something new, the big question is, how do you take the best of what you’ve learned and combine it to catalyse an alchemical reaction that creates something magical and new? I think that advertising agencies have always been so great at defining and articulating a brand, as well as connecting that brand to culture. On the other hand publishers’ strengths lie in creating a case of content that is engaging and will develop an audience and a fan base.

If you’re building an agency today, how do you marry those things so that your brand can benefit from the knowledge and experience of publishing but retain the classic understanding of what it takes to build and connect a major brand to culture.

We want to first crack and develop a brand whilst also fully understanding the through-the-line expression to all of the different touchpoints. There’s so much data available now that many agencies don’t use to its full advantage.

LBB> Have you both always worked in New York? It’s a notoriously competitive market. Why did you decide to set Joan up there?

Lisa> I’ve been living in NYC for 13 years although Jaime has spent some of her career working on the West Coast in San Francisco. Both of us are mothers, we have families, we own homes so setting up here was the obvious answer for us because that is where we are rooted. That said I don’t think this is the only place we will think about as we grow the company. Aside from the practical aspects, we also love this city. It’s incredibly vibrant and filled with insane talent.

Jaime> We also are excited to hire from outside the advertising industry and New York has so many talent-rich industries to pull from; tech, entertainment, food (I don’t know maybe there is a restauranteur we will hire at some point!), comedy, music, you name it. Diverse industry is crucial to finding diverse talent

LBB> People always call New York one of the best places they’ve ever worked but perhaps the most intense work-wise and creative-wise. Would you agree?

Lisa> If we were just moving to New York and opening an agency it would have been really daunting but I think the benefit is that we knew so many people already and had some rooting here. It’s a hard place to start something if you’re not native.

LBB> But an incredible place to be if you do know it well already?

LBB> As you mentioned above, you are both big advocates of diversity in the industry. Why do you think it’s a good time to be really pushing for diversity?

Jaime> I think that what’s happening in the world and culture right now is so exhilarating. We are listening to different voices and we are talking about difficult subjects once again that were difficult to talk about for so long.

Lisa> One reason diversity is so important to us even from a business perspective is that if we are going to make communications that really resonate with people, it has to come from a place of human truth. As creative people, the building blocks of what we create come from our life. We want the most interesting group of people who have the most interesting and diverse vibe in our workforce. This will give us more chance of really connecting brands to their audience and making campaigns pop.

I think the challenge we have with diversity is that if people don’t feel they are safe to be fully themselves at work for whatever reason, then you only get a portion of the great work they could be delivering. Why wouldn’t you want everything that someone has to give?

LBB> What’s your stance on Corporate Social Responsibility and how that affects diversity?

Lisa> When it comes to CSR and diversity I think we are very late as an industry. It’s great that it’s happening but it should have been done a long time ago. Saying that, many companies have been doing it in some form for many years, it’s not a new thing but it’s usually a side initiative. We aim to bring it closer to the centre of our business.

It should be through-the-line. Every piece of work that you do has to honour and respect the people it’s portraying (or reaching out to) in a responsible way.

Jaime> Building on Lisa’s points, CSR has, up until very recently, only been approached from one perspective. It’s been very worthy and lovely and faith-hearted, but it shouldn’t all have to be saccharine and sweet.

I looked at a piece we did recently for Netflix, ‘Rules for the Modern Woman’, which basically takes the piss out of all the terrible binding things women were expected to do and puts a modern spin on it. I think that is responsible. It’s respecting women and it’s saying, ‘you know what? Number one, you’re not just empty vessels that go shopping, you’re funny people. Number two, it’s also showing that you’re proud to say women shouldn’t have those rules imposed on them anymore.’ To me that’s corporate and socially responsible.

LBB> I understand you have a unique programme which provides your employees with a piece of the equity of Joan. Is that correct?

Lisa> Yes. We created a staff programme, that allows every single employee to own a participation element of the equity so, should we ever sell or take funding in any way, that Jaime and I wouldn’t be the only people that benefitted.

LBB> Why did you decide to incorporate that into your model?

Lisa> Well I think our initiatives are all connected. As I mentioned, we wanted to build a company where people can be themselves and bring their whole selves to work. When people feel that they can benefit from the success of that company I believe they will feel comfortable to bring forward their best ideas. It’s in our bones and in our structure to be the most inclusive environment for anyone. We want people to understand they’re not just building this for me and Jaime, it’s about the entire employee base and also the industry.

LBB> Your agency sounds very inclusive. Does this non-hierarchical culture extend across your working processes?

Jaime> Absolutely, we actively and openly ask everyone in the company to contribute ideas. In a pitch we did recently, the idea actually came from one of our most junior people. The key is for people to know this is a safe place where any idea is open to being heard. We’re all on the same team so we should all be building together. To be honest that doesn’t happen enough in agencies.

Lisa> One of the unsung challenges of agencies is working out how information can flow freely. Typically, information tends to get stuck in these little groups or with a creative director or with someone at the top. That’s just not effective or healthy. Ultimately, this challenge has arisen because the times are moving so fast and the mechanisms for communication between staff haven’t caught up.

One of the things we really believe in is using Slack. It is a transparent free-flowing method of working that ensures no idea gets quashed. On top of our project channels, we also have a channel called #CoolShit. At Joan, we have a workforce with diverse backgrounds and interests. It’s great for starting a conversation around things I never knew before; blogs I didn’t follow, bands I had never listened to, an art pop up I wouldn’t have known about.

Traditionally sometimes you have a department that would ask for input into a weekly company newsletter but that takes work and valuable hours. This way there is no barrier to posting. You see something and you post. Its instant and it’s a very alive part of our business that keeps people in the know with less being stuck or curated.