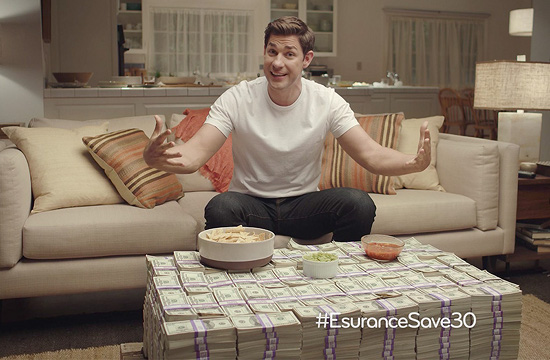 The winner of the Esurance $1.5 million Twitter sweepstakes was revealed last night on Jimmy Kimmel Live! on ABC.

Aunt Chippy from Jimmy Kimmel Live! interviewed the winner to get his reaction to the incredible news that his Tweet beat the estimated 3.3 million to 1 odds of becoming the winning entry.

Esurance announced the 36-hour sweepstakes in a television commercial that aired following the conclusion of Super Bowl XLVIII. All entrants had to do was tweet the hashtag #EsuranceSave30 to enter for a chance to win $1.5 million – the largest single amount of money ever given away on Twitter.

Esurance created the sweepstakes with Leo Burnett Chicago, which resulted in huge visibility for Esurance following one of the world’s biggest media events. Media and consumer insights firm Nielsen declared that Esurance was the most-tweeted about brand during Super Bowl festivities, surpassing global brands like Coca-Cola, Budweiser, and T-Mobile.*

“The sweepstakes was a tremendous success for Esurance, and I’d like to congratulate the winner and thank the millions of people who participated on Twitter,” said Esurance Vice President of Marketing Darren Howard. “Leveraging Twitter for the sweepstakes was a great way for us to connect with people in a fast, modern, and efficient way that reflects the Esurance brand.”

“The sweepstakes demonstrated the power of a hashtag when #EsuranceSave30 was tweeted more than 5 million times in less than thirty six hours, said Leo Burnett Chief Creative Officer Susan Credle. “Esurance trending over the Super Bowl Sunday night is proof that when you use mass media to announce a social media idea, it works really, really well.”

Sweepstakes data** from Esurance pointed to the incredible buzz that the 36-hour sweepstakes generated on Twitter and across the internet:

·5.4 million uses of the #EsuranceSave30 hashtag

·More than 200,000 entries within the first minute of the Esurance commercial airing