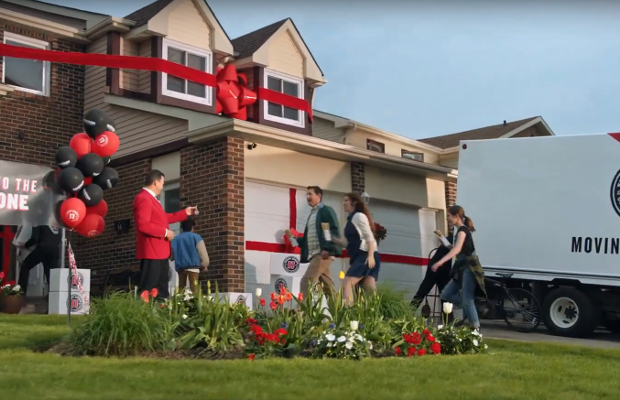 Today, Jimmy John’s announced the ‘Home in the Zone’ contest, which will give one Jimmy John’s superfan a home in a delivery zone so they can finally get a Freaky Fast and Freaky Fresh sandwich delivered. The Contest and national campaign, created in partnership with agency WorkInProgress, come on the heels of the company’s commitment to only deliver within five minutes of each of its stores—the “Sandwich Delivery Zone”—in order to maximise freshness.

Jimmy John’s fans who live outside any of its 2,800+ Sandwich Delivery Zones across the country will be eligible to enter the ‘Home in the Zone’ Contest. The winner, who will be selected based on a written entry, will win up to $250,000 towards the purchase of a new home inside a JimmyJohn’s Delivery Zone of the winner’s choice. The Contest will run from August 12th through October 4th, 2019.

“At Jimmy John’s, we’re committed to Freaky Fast and Freaky Fresh,” said chief marketing officer, John Shea. “While that means we can’t deliver sandwiches to our customers who live outside of our Delivery Zones, we can deliver our customers to our sandwiches.”
In February, Jimmy John’s was the first chain to declare that it would never authorize third-party aggregators such as Uber Eats, DoorDash, and Grubhub to deliver its sandwiches, since those services don’t meet Jimmy John’s high standards for efficient, reliable, and affordable delivery. While the $13 billion third-party food-delivery market is growing, 35% of customers say they have experienced a problem with deliveries, and 76% hold the restaurant partially responsible for those errors.
“We’re consistently faster, fresher, and a better value than any other delivery service,” said John. “With our Home in the Zone Contest, we’re looking forward to rewarding one of our customers with the opportunity to move into a Delivery Zone so they can experience the service that Jimmy John’s offers. We’re dedicated to proving that we’re the most passionate sandwich company in the world.”
The “Home in the Zone” Contest is supported by a national advertising campaign, which shows the great lengths Jimmy John’s fans will go to in order to get their hands on a prized sandwich. In one of the ads, a Jimmy John’s delivery person bikes up to a house with a white picket fence to hand-off an order to a rather nervous-looking couple. Shortly after the wife snatches the bag, the front of the house falls flat—it’s merely a façade so the family can qualify for delivery within the zone. “Jimmy John’s only delivers within five minutes of their stores to maximize freshness,” a narrator notes. “Which is great, unless you don’t live within five minutes of a Jimmy John’s.” He goes on to announce that Jimmy John’s is buying someone a house in a Jimmy John’s delivery zone, and how to enter the contest. Two additional executions show the excited family moving into their new home, provide more contest details, and direct viewers to read the commercial’s fine print, while assuring them this house deal is legit. Why? “Because sandwich.”
“Jimmy John’s would rather buy someone a house than deliver them a not-fresh sandwich,” said partner_creative at WIP, Matt Talbot. “If that isn’t a commitment to being Freaky Fast and Freaky Fresh, I don’t know what is.”
The campaign is backed by a national media plan beginning on August 19th that includes buys on more than 30 TV networks and cable channels (ABC, CBS, NBC, FX, A&E, TBS, Bravo, Food, ESPN) along with social and digital sites, including: Facebook, Instagram, YouTube, and Hulu.
For customers who already live inside a Delivery Zone, Jimmy John’s will also be running a Sweepstakes where five winners will receive free sandwiches and free delivery for one year.
For more details, and to enter, visit: https://dreamhomeinthezone.com
view more - Creative