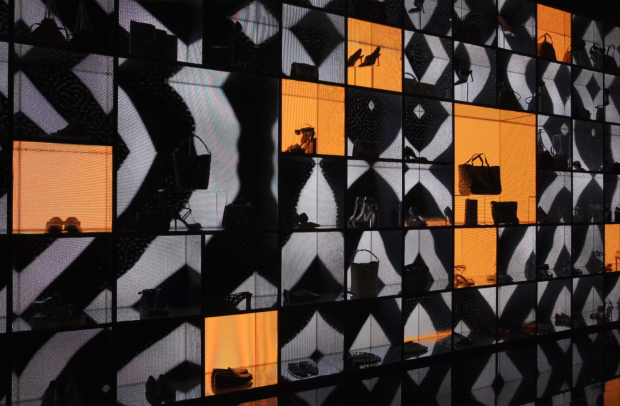 The Futz Butler have announced they've wrapped a month-long experiential sound design project for a unique bespoke installation for Jimmy Choo in Milan.

The installation, which ran for seven days in October to coincide with this year's Milan Fashion Week, was an immersive experience that enveloped the visitor through sound and a custom-built 3m high wall of evolving animated LEDs complete with mirror box cells.

For this new collection, Jimmy Choo’s creative director Sandra Choi drew inspiration from nature, suggesting “organic patterns that you are familiar with, but twisting and distorting them.” These new animal print iterations, for which the brand is renowned, are not strictly literal but instead, hybrids. “It’s twisting nature."

Working closely with the visual designers and brand, the Clerkenwell based sound studio worked to embody this strong creative concept sonically, marrying the graphical animated visuals into a performative space of light, sound, and movement. The final installation reveals the new SS20 collection through a landscape of pattern formation, exploring the interplay between particles, scale, shape, texture, and transition through the soundtrack.

As with all of The Futz Butler's sound design projects, the team began to build and design our own sounds tailored to the project rather than reaching for existing presets. Every single sound used in this project was recorded, designed and processed from the ground up by the team.

Head Composer at The Futz Butler, Paul Sumpter explains: "The sounds needed to have a natural quality to them, that evolved and moved in a very free and unsystematic way. That's not to say we weren't able to use synthetic or electronic sources or processing (we did just that) but it needed to feel organic and unrestricted, unpredictable and imperfect, the way real sounds occur in nature. We also needed the soundtrack mood-wise to balance an abstract, ambiguous quality with this organic centre."

"We also knew we would need audio that felt tactile to the ear - sounds with an inherent textural or material quality. So we recorded a plethora of sources to use as raw starting audio, ranging from coastal field recordings, vintage synths, boiling pans, small rubber toy flowers sporadically dropped on a tuned Kantele (a Finnish stringed zither) and rusty fairground props, amongst many others."