The collaboration between Jimm Lasser and Biff Butler was first forged in advertising, working on campaigns for Chrysler 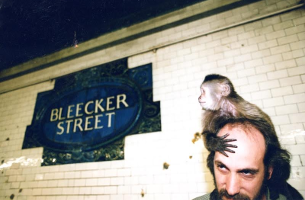 The New York Times Op-Docs today debuted Long Live Benjamin, a captivating six-part episodic documentary directed by Wieden & Kennedy's Jimm Lasser and Rock Paper Scissors's Biff Butler, and produced by Rock Paper Scissors Entertainment. The film focuses on acclaimed portrait artist Allan Hirsch who, while visiting his wife's homeland of Venezuela, unexpectedly falls in love. The object of his affection: a deathly ill, orphaned newborn Capuchin monkey named Benjamin. Nursing Benjamin back to health and sneaking him into New York City, Allen would find his life - and his sense of self - forever changed by his adopted simian son.

The collaboration between Jimm Lasser and Biff Butler was first forged in advertising, working on campaigns for Chrysler. One day, Creative Director Lasser was delayed to arrive to an edit session with Butler by the funeral for his cousin's Monkey, Benjamin. After explaining the unusual circumstances, he asked if Rock Paper Scissors could help transferring material he'd shot onto a hard drive. Fatefully, a copy of the media was left on Butler's computer and on a cross-country flight, Butler began exploring - and then editing - the fascinating footage.

Over the next five years, Lasser and Butler carved out time around their intensive work schedules to collaborate on this original story of relationships. Hirsh's life is steeped in documentation, from portraiture to home movies. Unearthed material was continuously discovered throughout the making of Long Live Benjamin. This wealth of media, stills, home movies, and Hirsh's original art, interwoven with Lasser's candid interviews, reveal a complex tale of love, loyalty and tested boundaries.

For Butler, unlocking the mystery of this powerful and intimate story proved to be one of the most challenging and rewarding of his career. "At first, the clips Jimm showed us were hilarious, but watched in their entirety I soon realized the story emerging was heartbreakingly sad," recalls Butler. "Crafting the film from archival footage and fractured stories over time was an immense challenge, and appealed two things I love to do: direct and shape narrative through editing."

Lasser describes the opening moments seen in the film as an electric shock that propelled him to embark on this inaugural documentary project. "This is a window inside an artist," Lasser explains. "Too often we focus on the artists' output. This film shows an artist struggling with the death of his companion and finding a way to let that spirit live on."

The process of crafting Long Live Benjamin became a through-line for the lives of both Lasser and Butler who, along the way, started families and continued to develop their independent careers.

Once he had a completed edit of the film, Butler shared Long Live Benjamin with his colleagues at Rock Paper Scissors and its film division, Rock Paper Scissors Entertainment. Launched four years ago, the Entertainment division is a natural expansion of the company's media legacy, and specializes in creating film, television and documentary programming across all formats and genres. Founded by Oscar and Emmy winner Angus Wall and Linda Carlson and run by producer Jason Sterman, its first documentary feature, Netflix's Winter On Fire: Ukraine's Fight For Freedom, was nominated for an Oscar and Emmy award while their ESPN 30 for 30 film First Pitch was nominated for a Sports Emmy. In 2016 they furthered their work in the documentary space producing the acclaimed Netflix films 13th directed by Ava DuVernay and Sky Ladder: The Art of Cai Guo-Qiang from director Kevin Macdonald.

"From the first time I saw Long Live Benjamin I knew there was something special about it,"says executive producer Jason Sterman. "I continued thinking about the effects of Allen and Benjamin's relationship long after watching it and I felt that with the right distribution partner we could bring this story to an audience that would come away with a much deeper sense of what the relationship between man and animal could be."

Rock Paper Scissors Entertainment approached Kathleen Lingo who heads up Op-Docs, The New York Times editorial department's award-winning forum for short, opinionated documentaries, as a distribution partner for Long Live Benjamin. "The publication of Long Live Benjamin as a multi-part series continues Op-Docs's vanguard approach to storytelling. We have done series before, but this is the first series we have published that has taken one story arc and broken it down into episodes."

As presented by The New York Times Op-Docs, the film screened in its entirety as a World Premiere to a sold out crowd at the prestigious DOC NYC Film Festival, followed by a European Premiere at IDFA before Op-Docs's global digital release. For Butler and Lasser, both fans of podcasts and serialised storytelling, the episodic release via Op-Docs is an exciting and rewarding chance to see Long Live Benjamin reach audiences worldwide.

You can check out episode one below, and the rest of the films right here.