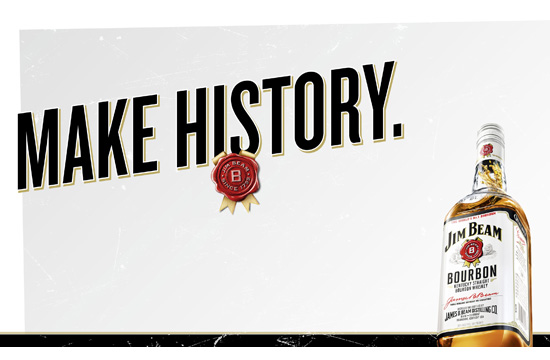 First truly global campaign developed and stewarded by a close collaboration of the three agencies for world’s #1 bourbon to reach more than 100 markets; integrated multi-year campaign unites Jim Beam’s unique heritage with consumers’ desire to make a history of their own

Beam Inc. (NYSE: BEAM) today announced the launch of Make History™, the first ever brand campaign for its flagship Jim Beam Bourbon to span all of the brand’s markets globally. Make History™ is a multi-year, multi-media campaign that will launch in the fourth quarter and roll out in more than 100 markets around the world over the next nine months.

“As the world’s number one Bourbon whiskey, Jim Beam has been making history since 1795,” said Matt Shattock, president and CEO of Beam Inc., in remarks prepared for delivery today at the Barclays Capital Consumer Conference in Boston. “We’re excited to announce today the launch of Make History™, the first truly global advertising campaign for Jim Beam. This multi-year campaign reflects sharp global consumer insights, substantial investment in the continued growth of our flagship brand, and our sustained commitment to the attractive and fast-growing Bourbon category around the world. Make History™ is a big brand idea that resonates with consumers across global markets.”

“Make History™ is a call to action to consumers to be inspired by the legacy of Jim Beam to go make some history of their own, be it a memorable night out with friends or putting their stamp on the world as they pursue their dreams,” said Kevin George, global chief marketing officer for Beam. “Indeed, regardless of geography, every night is an opportunity to Make History™. At its core, this campaign celebrates those who turn everyday moments into memorable stories – just like Jim Beam has been doing for generations.”

“In today’s global market, we have proven that no other global agency partner is better at building a relevant global brand across all territories than the three agencies working in close partnership to build Jim Beam, says Scott Goodson, Chairman of StrawberryFrog and member of FutureWorks. We brought together three best in class global agencies – Jung Von Matt, StrawberryFrog NY and The Works Sydney – and forged a close relationship with the best interests of the client and the brand, to maximize it’s most developed markets and take advantage of growth around the world. There is no better way to build a global brand in today’s fast changing market environment.”

Make History™ will span television, digital,social, print and out-of-home media and will be complemented with extensive activation and promotional activity at retail. The campaign will launch first in the world’s two largest Bourbon markets – the U.S. and Australia – with other key Bourbon markets to follow, including Germany, Jim Beam’s second largest export market, Mexico, Canada, Brazil, New Zealand, and other countries throughout Europe, South America and Asia-Pacific.

The global campaign will encompass the full line of premium Jim Beam products, including the flagship Jim Beam White, Jim Beam Black, Devil’s Cut, Jim Beam Honey and Red Stag by Jim Beam. For more information and advertising samples on Jim Beam Make History™, log on to www.jimbeam.com. <Ensure the global site will have the appropriate information up next week.>

The campaign has been developed by Future Works, a consortium of three incumbent agencies that had worked on the Jim Beam brand in various markets: StrawberryFrog (New York), The Works (Sydney) and Jung von Matt (Hamburg). Future Works was awarded the campaign after a global pitch conducted earlier this year.